1 in 7 orders on Dutch online stores is from abroad

About 14% of orders that were placed on online stores in the Netherlands during the first three months of 2014 came from foreign customers. This percentage has almost doubled compared to the first quarter of last year, when it was less than 8%. So, the share of foreign orders on Dutch online stores is rising, however it’s still low compared to other European countries.

In Germany, one in four orders (27%) on local online stores comes from foreign customers, while this percentage is 24% in the United Kingdom. The Netherlands is perfectly comparable with France, as this country has the same share of foreign online orders (14%). That’s what our Dutch sister site Webwinkel Weblog wrote this morning, based on research from parcel shipping software company Paazl.

Paazl also looked at where these foreign orders come from exactly. Not surprising, it’s mostly from its neighbor countries. Customers from Belgium accounted for 58% of all foreign online orders on Dutch online stores during the first quarter of 2014. One year before, its share was even bigger with 67%, so this leads to the impression the Dutch ecommerce market is getting more diverse and reaching more other countries. That’s also proven by the fact the French share grew from 2% during Q1 2013 to 7% a year later. The German share grew slightly from 18% to 18,5% while the share of the British online shoppers grew from 4,5% to 7,7%. 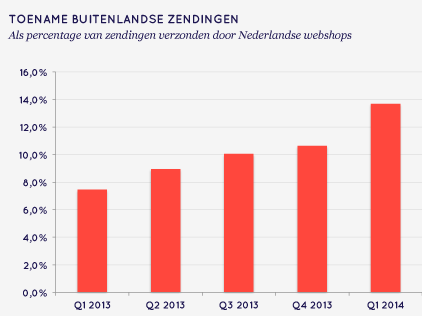