Almost a quarter of Europeans has bought something online across the border during the past three months. For online retailers who have reached maturity in their home market and for specialists, the foreign market offers enough growth potential, researcher Forrester concludes.

And there are especially plenty of opportunities for online retailers in smaller European countries, as consumers from the bigger countries like to shop online at domestic stores. This is one of the conclusions from the study ‘Plan your ecommerce expansion’, conducted by Forrester and described on Dutch marketing blog Emerce.

Cross-border shoppers spend more
The cross-border shopping consumers happens to spend more money online (€337) than the consumer who only shops at domestic web stores (€228). And according to the research it’s mostly inhabitants from smaller EU countries and countries with a less developed ecommerce industry who shop abroad. When asked the question “In the past three months, have you ever ordered products from a website outside of your home country”, 30% of the Swedes, 29% of the Spaniards and 28% of the Italians answered with “yes”. In Germany this percentage was only 16%. 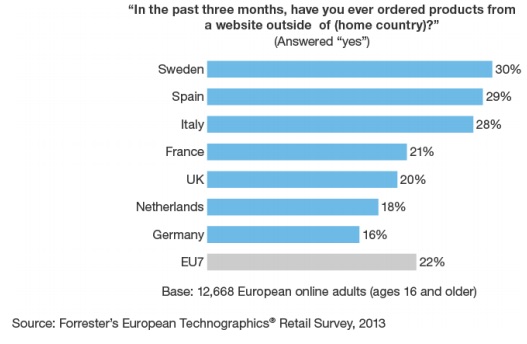 When planning to expand internationally, Forrest suggests to implement a phased internationalization plan. Local market places like Amazon, eBay, Rakuten or Bol.com are good places to test the water when entering another country. The next step would be to build the brand and to work closely with local partners. According to Forrester it’s also important to make a partner road map, so it becomes clear which parts of the operation are done by the online store and which parts will be outsourced locally. Die moet inzichtelijk maken welk schakels de shop zelf doet en welke worden uitbesteed.