4 in 10 top retailers ship to Europe

42% of the merchants in the Internet Retailer Top 500 ship to at least some European countries. Web-only merchants seem to be the most European centered retailers. More than 150 retailers ship to all the 18 biggest European online retail markets, including The United Kingdom, Germany and France.

Those statistics are made public by the Internet Retailer. They also say that of those 157 retailers 65 web-only merchants ship to the 18 biggest ecommerce countries in Europe, followed by 61 chain retailers, 19 catalogers and 12 manufacturers.

Europe remains an important ecommerce market for the top merchants in the Internet Retailer Top 500, a list with the 500 leading players in North American ecommerce, based on their 2012 web sales. For example, in 2012 sales of Amazon Germany grew 20.7% to $8.73 billion and sales of Amazon UK grew 21.2% to $6.47 billion. Last year Amazon opened two new distribution centers in Europe, so it now has more than twenty of such centres on this continent.

But American retailers who wants to be (more) successful in Europe will need to do an even better job of shipping to these customers, otherwise they can’t keep up with the enhanced fulfillment services of local retailers, says Joshua Bamfield, director of the Centre of Retail Search.

More and more European retailers offer a so called ‘click and collect’ service, which enables their customers to shop and pay online, and then pick up their order at a store or other location, whenever they feel like it. A lot of European retailers have seen what Amazon can do and therefore they’ve been investing a lot to make their own fulfillment choices better for their local customers. So if, as a American, you want to compete with the European retailers you have to be there, instead of shipping from over there! 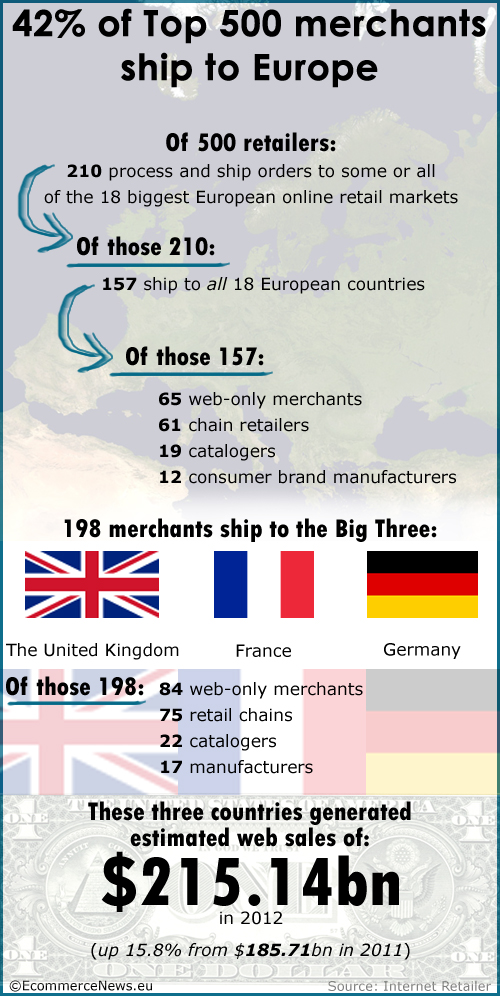