Nearly 60% of all internet users in Europe had shopped online last year. The highest shares of online shoppers can be found in the United Kingdom (82% of internet users), Denmark and Sweden (both 79%) and Germany (77%). The lowest shares were registered in Romania (11%) and Bulgaria (17%).

Italy is also one of the bad performing countries as only 29% of its internet users had shopped online in 2012. These are some facts we’ve gathered of the data Eurostat, the statistical office of the European Union, has published in the context of the European Year of citizens 2013. Last week was dedicated to shopping online and that’s why Eurostat published some data about online purchases.

Clothes, travel & holiday accommodation are amongst the most common online purchased made in the European Union. These kinds of products and services were brought online by 32% of the European internet users, while almost one quarter (23%) of netizens in the EU28 bought (e-)books or magazines online. Almost one internet user in ten (9%) ordered food and groceries online. 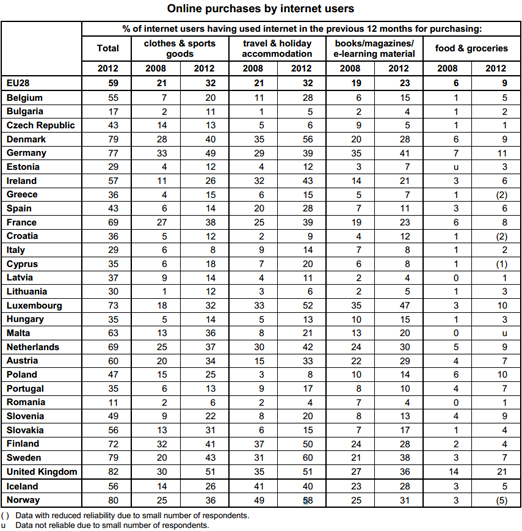