Americans are able to shop online at H&M in August

American fans of Swedish retail-clothing company H&M will finally be able to shop online for their favorite dresses, shirts, jeans, accessories and more. H&M, which is known for their reasonably stylish clothing at low prices, revealed yesterday on Twitter that U.S. customers are able to buy their products online next month.

It’s thanks to Glam.com that we now know when H&M is launching their ecommerce plan in the United States. Via Twitter this lifestyle website asked H&M: “Can we get an update on your ecommerce plan? Pretty please?” The tweet was accompanied by a link, leading people to a post on the Editor’s Blog on Glam.com. “Despite multiple reports that the Swedish retailer would finally launch its long-awaited U.S. e-commerce site in the ‘first half of the year,’ H&M hasn’t launched anything yet. Initial reports said the site would be live by June, but it’s July and there’s still no word. People are getting a little antsy, and they want answers. Hopefully H&M throws us a bone and gives everyone a head’s up on its progress.” 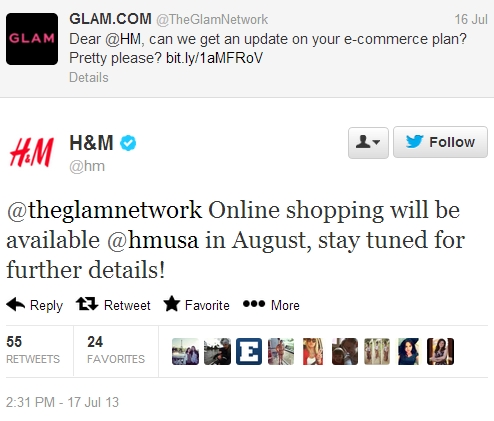 Shop online at H&M US in August
But soon Glam had to write an update, because H&M answered their question. “Though they were initially hoping to offer online shopping way earlier, it looks like everyone will finally be able to scour the H&M website and click purchase this August! Did you notice the significance of the date? It’s conveniently prior to Fashion Week and the November launch of Isabel Marant‘s collaboration!”, says the blog.

So, Glam is happy and we are confident more U.S. customers are happy about this. H&M is in Europe an established name in the fashion retail industry. The first non-Swedish store was opened in Norway in 1964, while twelve years later the first non-Scandinavian store opened in the United Kingdom. In the ’90s more stores opened in countries like France, Germany, Spain and the Netherlands. The first U.S. store opened in 2000.