The British online fashion retailer ASOS is planning to launch a Chinese website in October of this year. Over the next three years it wil spend between £12m ($18.6m) and £18m ($21.4m) in an attempt to break into the booming ecommerce sector in China.

ASOS is already active in the United Kingdom, the United States, France, Germany, Italy, Spain and Australia. And since this month there’s a Russian site. But with the Chinese launch it’s different. “Everything in China is separate – with separate technology and separate stock”, says chief executive Nick Robertson. Actually it’s not a surprise, because otherwise ASOS would have to post their stock from its distribution centre in Barnsley to Beijing. And that ‘would have proved tricky logistically’.

Although the ecommerce sector in China is booming, ASOS doesn’t expect its local site to be an instant cash cow. Robertson expects it to be lossmaking for the first two years. Furthermore, ASOS announced some financial results for the last six months. Total retail sales went up 34% (internationally there was a growth of 39%) and the profit befor tax and exceptional items went up 11% to £25.7m ($39.8m). ASOS now has six million active customers, whereas in 2012 there were 4.3 million of them.

Since its launch in 2000 ASOS is outpacing  the competition with lower-priced own-brand offering in the United Kingdom. It sells over 60.000 branded and own-label products and ships for free to 214 countries around the world. 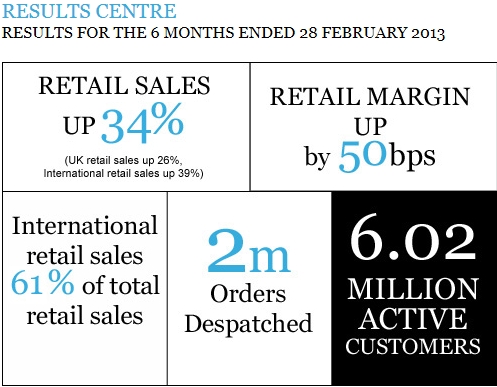