Out of 18 European countries, the United Kingdom has the highest share of people who order something online every month using their smartphone. Almost one in three Britons shop on their mobile, while two in three Britons are using smartphones.

To be more precise: 32% of UK consumers make a monthly purchase on their smartphones. That’s a lot more than just 8% in France, 15% in Germany or 19% in Sweden. This became apparent from research from Google and TNS. This study also found around 83% of thousand UK consumers surveyed said they used the internet on a daily basis. This percentage was 75% last year. The percentage of people visiting social network also rose, from 64% in 2013 to 72% this year. 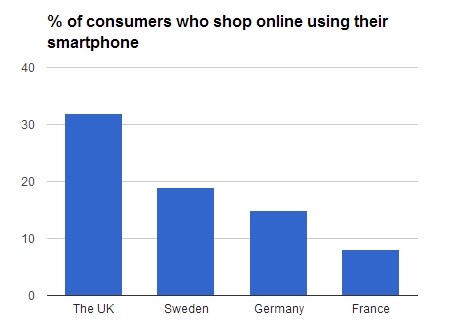 According to Matt Brocklehurst, Product Marketing Manager at Google, people in the United Kingdom are increasingly using their smartphones for researching products, locating stores and making purchases. “That’s why it is now essential for businesses to ensure their sites are mobile-ready. However, adapting or creating a website to work seamlessly across smartphones, tablets and desktops is a significant and ongoing undertaking. We hope our new resource will help companies who already have a mobile-friendly site improve its performance, and those in the planning stages find the right route for them, whether that’s responsive web design, dynamic serving or a separate mobile site.”

The study gave even more insightful data about Brits and their mobile habits. For example, smartphone usage in the UK has increased from 62% last year to 68% now. It was also found that eight in ten UK online consumers use the internet daily (75% in 2013) and 64% uses it several times a day (57% in 2013). More UK online consumers ordered something on the internet this year (77%) than last year (72%).

Nothing to do with the research, but more with Britons and their online habits: Ofcom published figures showing the UK overtakes major European nations in terms of superfast broadband. Among the five biggest economies in Europe (the UK, France, Germany, Italy and Spain) the UK has the highest broadband take-up, the highest proportion of people to have bought gods online over a year, the highest weekly usage of the internet and also the lowest proportion of people who have never used the internet.