Cross-border ecommerce in UK up 57%

Cross-border ecommerce sales from the United Kingdom saw a 57 percent year-on-year increase in 2020. Outbound online sales grew substantially from April up to the holiday period, with a significant spike starting in September.

Ecommerce in the United Kingdom is known for its major local ecommerce companies. Nonetheless, 36 percent of online shoppers in the UK buy online from other countries.

36% of online shoppers in the UK buy abroad.

The latest Cross-Border Index from IMRG shows that there was an overall 57 percent year-on-year increase in outbound ecommerce sales from the UK last year. From April onwards, there’s a consistent increase in cross-border ecommerce trading, with a significant spike starting in September and reaching its climax in November. 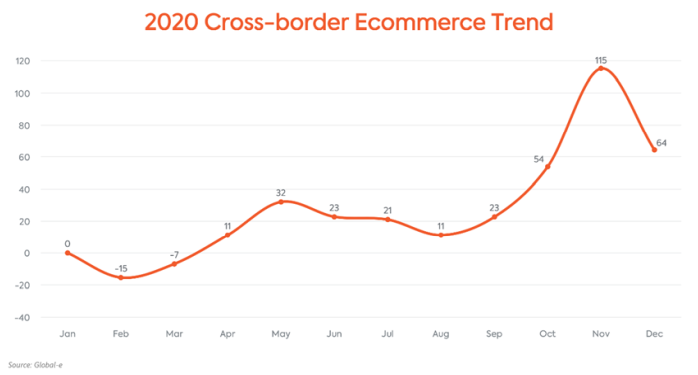 The index not only focuses on trends in the UK, but also in Europe. It shows that non-EU markets saw higher cross-border sales volumes for most of the year. There was however a shift from September until December, where the EU volumes exceeded the non-EU ones. 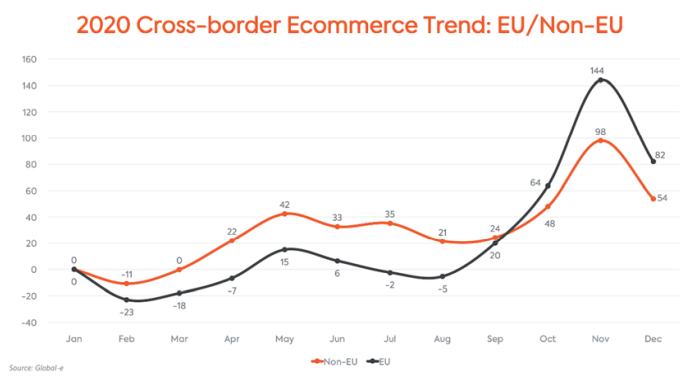 According to Internet Retailing, this suggests a higher demand for British products among EU citizens during the holiday period last year. “That demand could have also been accelerated by consumers’ concerns around shopping from their favorite UK brands post-Brexit whilst a deal was still to be agreed.”

Neil Kuschel, CEO Europe at Global-e, which co-produced the index, says the increased demand from the EU highlights a strong and growing appetite for UK brands. “Although Brexit has brought some complexity for UK ecommerce retailers selling into the EU, they should not cease trading to the EU as it is a vital channel for growth.”

He continues: “Encouragingly, many UK brands who are managing the Brexit complexities internally and ensuring their consumers have a seamless experience, are seeing no change in post-Brexit EU sales. In order to reap the benefits of the growing cross-border opportunity, UK brands and retailers selling online must now treat EU markets in the same way they would any other international market.”

UK brands must treat EU markets the same way they would any other international market.