July 16, 2020 by Ecommerce News. About Cross-border, Laws and regulations with tags Europe.

Over half of online businesses in Europe believe that cross-border expansion within the European Union is becoming increasingly difficult. Research shows that the diversity of regulations across the EU is a barrier to international growth.

The European Union was once set up to enable free movement of goods, services, capital, and labor between the member states. The Digital Single Market was introduced with the same vision, to move from 28 national markets to a single one.

A minority understands all regulations that apply to them

But currently, there are lots of rules and things haven’t become easier for ecommerce companies in Europe. A study from Stripe, among leaders of 500 online European businesses, shows that only a minority say they understand all regulations that apply to them. And 33 percent say there are fully confident they are compliant with regulatory standards.

Diversity of rules is costly and challenging

“The findings were striking and unambiguous: the diversity of regulations across the EU is a significant, costly, and increasingly important challenge in the minds of online businesses”, Stripe writes. For over a quarter of respondents, regulation and compliance are one of their top 3 challenges. And 23 percent said the uncertainty around changing rules (rather than the rules themselves) is a leading business challenge.

Uncertainty around changing rules is a leading business challenge.

‘Selling into other EU markets is a challenge’

The report also shows that 51 percent of respondents say that selling into other EU markets is a challenge. “Whether real or perceived, borders remain etched in the European business map, with unharmonized regulations and taxes often the cause.”

Stripe also asked what ecommerce companies want from the Digital Single Market? The answer is: regulatory and tax harmonization. Almost two out of three businesses say they would be active in at least 10 countries if either regulations or tax regimes were harmonized across the European Union.

What ecommerce companies want from the Digital Single Market? Regulatory and tax harmonization.

“The desire to expand is almost unanimous, with small to medium-sized businesses with fewer than 100 employees in particular striving to sell in all EU markets (38 percent, compared to 27 percent of companies with more than 100 employees).”

About three-quarters of businesses think compliance is an obstacle to their growth, and 30 percent even call this a ‘great challenge’. Most companies feel they could increase their revenue by 30 percent if they didn’t have to deal with regulations and compliance. 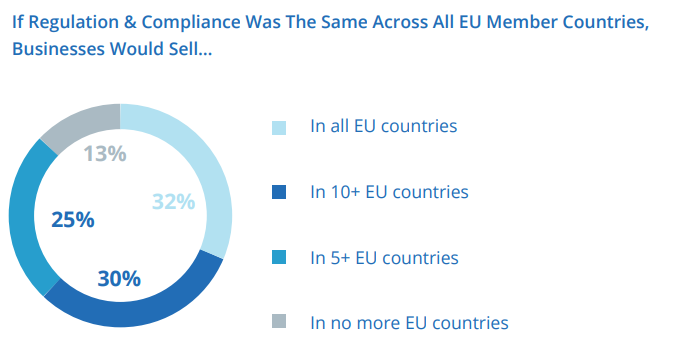