Cross-border ecommerce in Europe is very popular. But of course, there are some differences per country. Online shopping across borders is more popular in Ireland for example than in Poland, where 62 percent of consumers shop domestically only. This is shown by the PayPal Cross-Border Consumer Research.

With the advanced study [pdf], conducted in 31 countries with about 34,000 consumers, PayPal wanted to find out how ecommerce, and specifically cross-border ecommerce is evolving, how and why consumers shop online domestically and across borders, and how consumers pay for domestic and cross-border transactions.

One of the things PayPal looked at, was how online cross-border shopping was represented in several European countries. For example, shopping across borders is most prevalent in Ireland and Austria, with respectively only 16 and 18 percent of consumers that only shop domestically.

In Germany and Poland on the other hand, domestic shopping is still far superior, as 68 percent of Germans and 62 percent of Polish consumers shop domestically only. 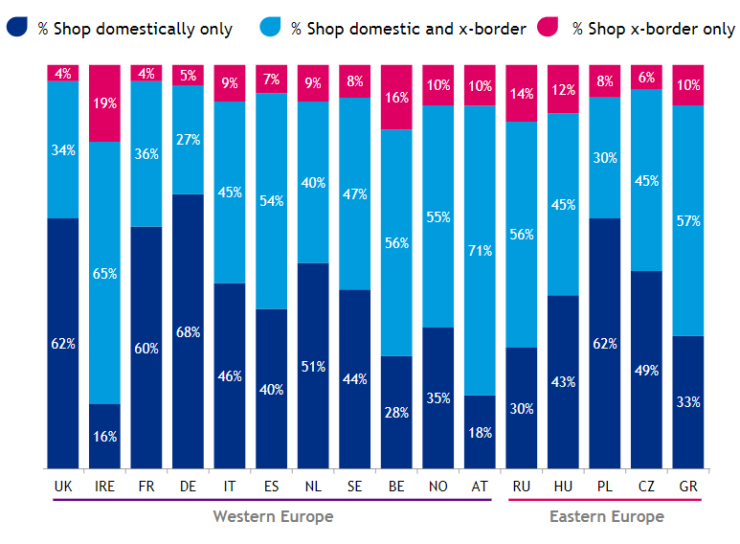 Overall, in Western Europe, 43 percent of consumers shop domestically only, while 48 percent go to both domestic and foreign web shops to purchase products online. The remaining 9 percent only shopped across the border in the past twelve months. In Eastern Europe, things aren’t very different: 44 percent shops domestically only, 47 percent do both and 10 percent shop only at online stores located abroad.

Most cross-border purchases done from computer

For global shoppers, China and the US are still the most popular cross-border destinations, but Western European markets are the next most popular. Among all consumers surveyed, 14 percent said they shopped at online stores in the UK, while 10 percent said the same about German ecommerce websites.