March 16, 2020 by Ecommerce News. About Statistics with tags Belgium.

Belgian ecommerce broke all national records in 2019. Last year, Belgian online shoppers spent 11.46 billion euros, which is 900 million euros more than during the year before. Belgians shopped, on average, 13.4 times online, which led to a total of 112.9 million online purchases.

“More than ever, ecommerce is the key driver for growth in the Belgian retail industry: about half of the growth happens online”, Sofie Geeroms, managing director of BeCommerce, comments. According to the study done by this ecommerce association, the Belgian spent, on average, 1,363 euros online last year.

Travel flights and accommodation (not in package) are still the most popular product category online, as 87 percent of the spending in this category happens online. This is followed by tickets for events and attractions (79 percent) and package travel (65 percent). “The spending in these three categories remains practically the same”, Geerom comments.

The growth of the Belgian ecommerce should be found more in categories such as health & beauty. That category grew a quarter last year, when you compare it with the situation in 2018.

Ecommerce in Belgium is still mostly driven by Flamish consumers spending money online. Online spending only grew in Flanders (+11 percent) during the last quarter of 2019. In Wallonia, the spending decreased by 2 percent during the same period.

Most ecommerce purchases are done on laptops, although the popularity of smartphone is increasing. Last year, the usage of smartphones grew even 54 percent compared to the situation in 2018. Now, 12 percent of all online spending is done on mobile phones. When a Belgian consumer needs to pay a significant amount of money online, the laptop and desktop are still, by far, the most popular device.

For expensive purchases, Belgians keep on using the laptop. 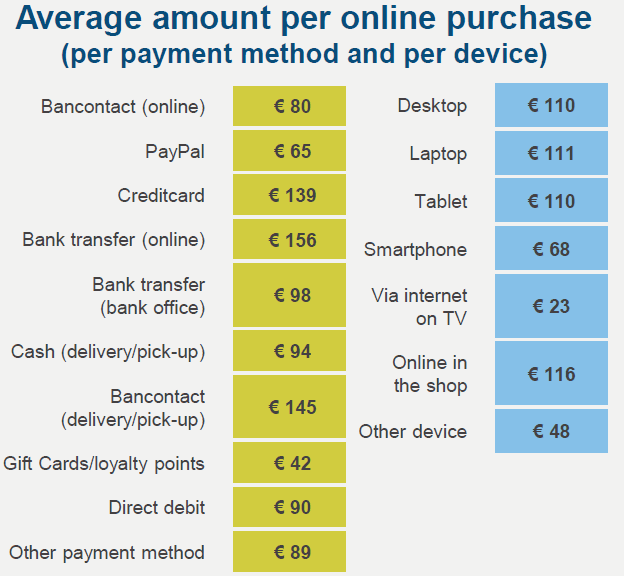