2013 proved to be a very good year for the ecommerce industry in Belgium. The Western European country has caught up with its neighbor countries and the forecasts for 2014 are also very positive. Online sales in Belgium grew 25,66% to reach 1.91 billion euros last year.

This is shown by a survey held by BeCommerce, a Belgium association for companies active in ecommerce. But although there are some positive sounds, BeCommerce thinks there are still a lot of opportunities the Belgian ecommerce industry needs to embrace. For example in the mobile sector and in terms of social media usage.

A lot of confidence in Belgian ecommerce
But let’s not be negative right away. Nine in ten Belgian companies surveyed think that online sales will grow even further in 2014, as expectations are the 2 billion euros milestone will be passed next year. According to BeCommerce, confidence in the Belgian ecommerce industry was never this big. Almost six in ten online store owners think that the internet will be the most important, if not the only, direct sales channel within two years. Only two in ten companies thought the same in 2012.

Another positive thing about the growth of ecommerce in Belgium, is the number of jobs. A third of the online stores surveyed this year has between 11 and 20 employees, while most of the companies had between six and ten employees in 2012. This trend will continue as 87% of all companies surveyed is planning to hire more staff. They are particularly interested in e-marketing or IT specialists and customer service representatives.

Popular product categories, payment methods and logistics carriers in Belgium
The survey also shows that for six in ten orders places online the average value was more than 100 euros, and for one in eight orders the value was even more than 500 euros. The most popular product categories in the Belgian ecommerce industry are clothing & accessories, home decor, multimedia & hardware, toys and kitchen appliances. The most popular online payment methods are Visa, MasterCard and Bancontact/Mister Cash. Bpost is still the most popular logistics carriers in Belgium as 59% of the companies surveyed made use of their services. Kiala (39%), DPD (24%) and TNT PostPakketService (12%) are also quite popular. 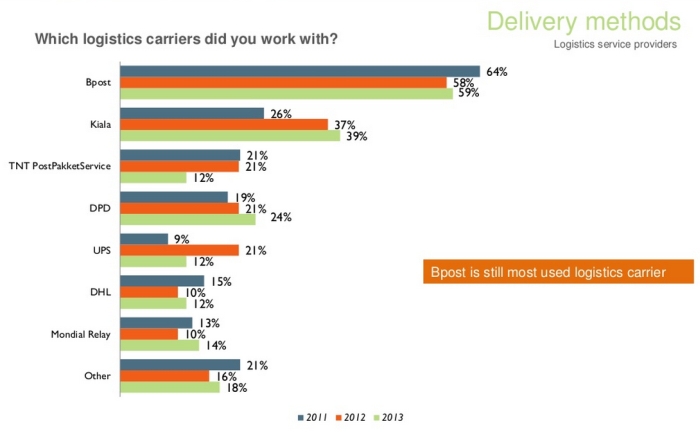 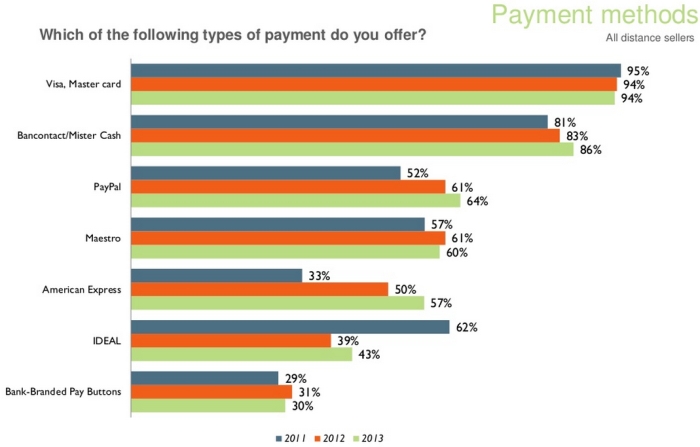