Last year, around 4.1 billion consumers from all around the world used the internet and the lion’s share of these people bought something online. Together they shopped on the Internet for a total amount of 1.2 trillion euros. In Europe 392 billion euros was spent last year, which corresponds to a growth of 17.1% compared to 2012.

This is all revealed by the latest Global B2C E-commerce Report from the Ecommerce Foundation. Although Asia-Pacific holds the number one position in terms of total ecommerce turnover (€460.9bn), with 392 billion euros Europe is among the top regions in this regard, which is still more than the turnover of 367.5 billion euros in North America.

Asia-Pacific is not only the region with the biggest ecommerce turnover, it has also shown the biggest growth rate (44.6%) last year. Latin America (21.4%) and the Middle East and North Africa region (32.6%) have also grown significantly. 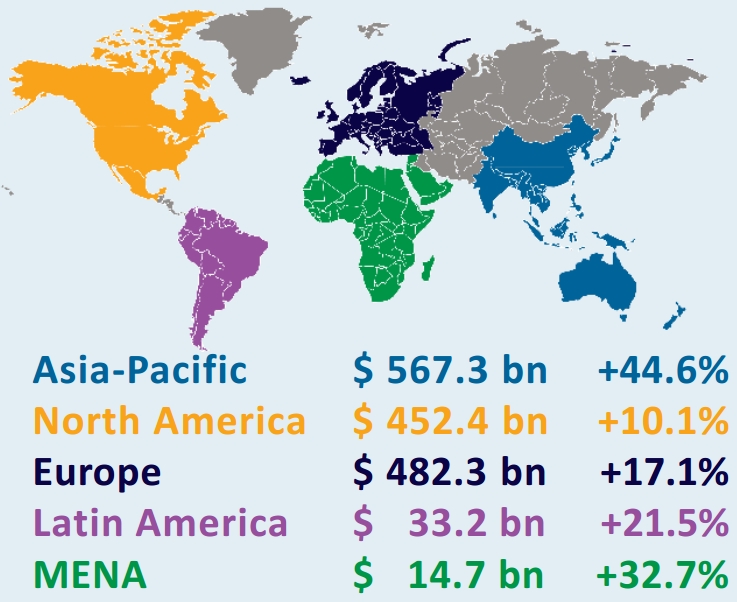 The US is the worldwide ecommerce leader
When we zoom in and not focus on regions anymore, it becomes clear the United States is still the ecommerce leader, as consumers from this country shopped products and service online worth 341.48 billion euros in 2013. But China is on its way! Ecommerce in this Asian country grew by 78.5%(!) to reach 266.8 billion euros last year. It’s not surprise the forecast is now that China will surpass the United States in 2014 and that is will become the new global leader in terms of ecommerce.

The complete top 5 consists of two European countries: the United Kingdom finished third with 115.97 billion euros, while Germany (€68.6bn) has to accept there’s still a gap between them and Japan (€111.4bn).

European shoppers one of the biggest online spenders
“People from North America and Europe were on average the biggest spenders in the world last year, as they spent €1,571 and €1,490, respectively. In comparison, in Asia-Pacific the average e-consumer spent €1,033 last year”, the non-profit organization states. But when we look at the average online expenditure per online shopper in countries, we see that the UK ranked head and shoulders above the rest. With €2,829 they beat the Americans (€1,806) and Australians (€1,766).