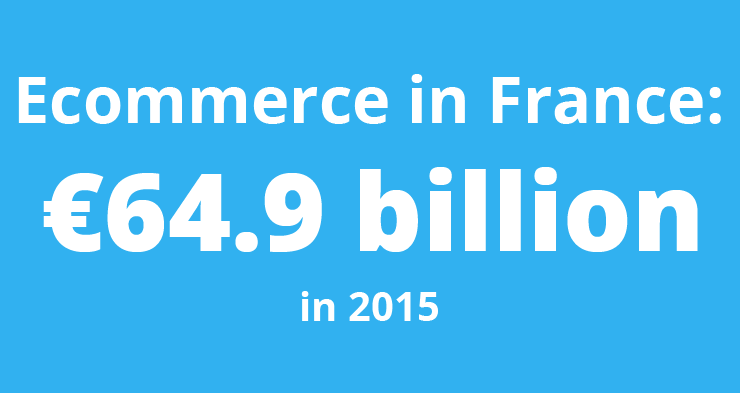 Ecommerce in France was worth 64.9 billion euros last year and could reach the 70 billion euros milestone this year. Total sales of the online retail industry increased by 14.3 percent last year, compared to sales in 2014, when sales increased by 11 percent compare to the year before.

The French association of ecommerce and distance selling Fevad shared these numbers yesterday. Based on information collected from major online retailers and the aggregate amount of transactions by major payment companies, Fevad calculated the number of online transactions has grown from 700 million in 2014 to 835 million last year, which corresponds to an increase of 19 percent.

Strong holiday season
The increased growth rate of the French ecommerce industry is due to a growth that was stronger than expected during the first nine months and Christmas sales that were up 12 percent compared to the holiday period in 2014. During the last holiday season, the online sales of products and services increased by 12 percent to 12.8 billion euros.

Are there only positive numbers to share about the French ecommerce industry? Mais non! The average basket value dropped to 78 euros in the fourth quarter of last year, which is a decline of 5 euros and 6 percent compared to the same period in 2014. But according to Fevad, there’s no need to worry. “This confirms the normalization of buying online, and the average amount is gradually approaching that of in-store purchases.”

According to Fevad, the purchase frequency was also affected by the number of retail websites. This number increased by 16 percent as there were 25,000 new ecommere websites during the last twelve months. There are now more than 182,000 active ecommerce websites in France.

Fevad also looked at the development of the iCM index, which measures mobile sales. This index increased by 39 percent in one year and now represents 20 percent of the online industry’s total volume. The market is estimated to be worth more than 6 billion euros, which corresponds to 10 percent of the ecommerce market.

Ecommerce in France in 2016
For 2016, Fevad expects the ecommerce industry in France to be worth at least 70 billion euros, while it also expects consumers to make nearly 1 billion transactions this year. Also, the milestone of 200,000 active ecommerce websites should be reached.