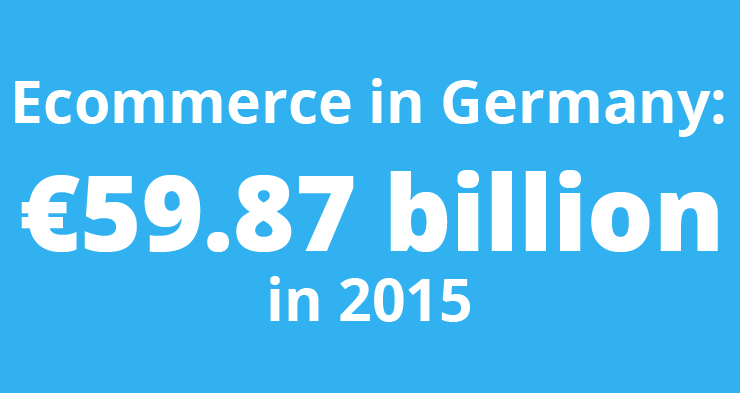 The online and mail order industry in Germany recorded a sales increase of 12 percent last year. This growth rate is significantly higher than that of the total retail industry, which saw its sales increase with 3.1 percent. Ecommerce in Germany was worth 59.87 billion euros in 2015.

This is the main conclusion from the report “Interaktiver Handel in Deutschland” from German ecommerce association BEVH. It looked not only at online sales, but also at sales coming from mail order companies. This leads to several figures which can be confusing sometime.

“The interactive commerce industry had grown four consecutive quarters last year”, says Gero Furchheim, president of BEVH. “The buying mood is stable thanks to the robust economy and low interest rates. The increase in sales is a vote for the mouse click: ecommerce and mail ordering represent more selection, more service and a modern shopping experience.”

The latter is still in the top three of best-selling product categories online, but it saw sales decrease by 8 percent last year. According to BEVH, the books market is experiencing a period of upheaval. “Inexpensive self-publishing products, subscription-based business models and online libraries where you can lend e-books are increasingly popular”, says Christoph Wenk-Fischer, CEO of the association.

With a turnover of 24.95 billion euros, online marketplaces account for more than half of the total turnover of ecommerce. Multi-channel players have generated sales being worth 13.97 billion euros last year, which is an increase from 27 percent compared to 2014. Pure players, companies that only sell online, followed with sales of 6.3 billion euros.

12% growth expected for 2016
Conservative estimates of BEVH predict a 12 percent growth in online sales of products this year, leading to this part of the ecommerce industry being worth 52.5 billion euros in 2016. “We continue to expect above-average growth of online and mail order sales, compared to the total retail industry. The volume of retail trade still allows room for much more ecommerce”, Wenk-Fischer says.