Ecommerce in The United Kingdom

The United Kingdom (UK) is one of the leading countries in the western world. As one of five permanent members of the UN Security Council and a founding member of NATO, it is an influential country. The UK chose to remain outside of the Economic and Monetary Union and kept the British pound as currency. In 2021, the country left the European Union with Brexit.

Ecommerce events in the United Kingdom

Every year there are several ecommerce events being organized in the United Kingdom. We have a handy ecommerce events calendar, where you can find all the major online retail events in Europe.

Ecommerce customers in the United Kingdom

A study from the Ecommerce Foundation in 2019 shows that PayPal is, by far, the most popular payment method in the UK. Over 40 percent of buyers have used PayPal at least once in 2018. Credit cards (23.7 percent) are also popular, followed by prepaid cards (17.2 percent).

A study in 2021 from Merchant Advice Service found out that 67 percent of UK adults use digital wallets such as Apple Pay and Google Pay. Up to 24 percent of shoppers also want retailers to give them ‘buy now, pay later’ options, such as Klarna and Clear Pay.

The ecommerce market in the United Kingdom

A report from the Ecommerce Foundation shows that 7.94 percent of the country’s gross domestic product is made up by ecommerce sales. An older study showed that ecommerce accounted for 10.7 percent of total retail sales in 2014. Ecommerce in the UK is expected to be worth slightly over 200 billion euros at the end of 2019. 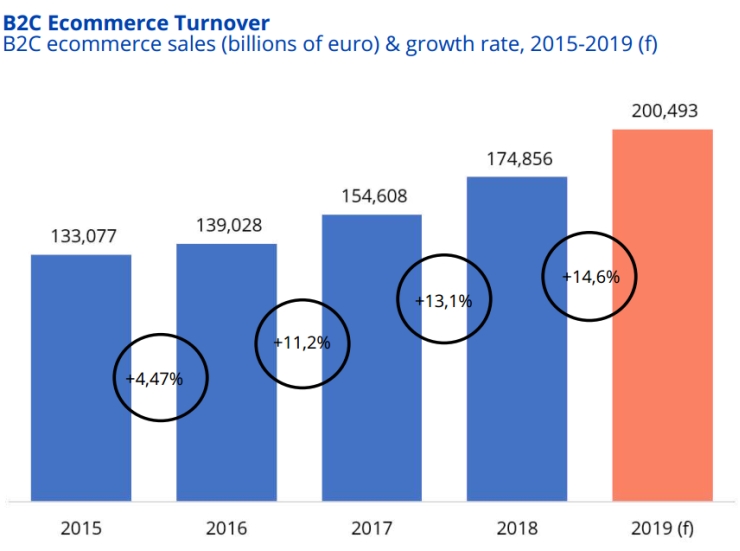 The biggest players in the UK’s online retail market are Amazon, Tesco and eBay. Other big online retailers are Asos, Argos, Play.com, Next and John Lewis.

Latest news about The United Kingdom

Read all our articles about ecommerce in the United Kingdom.