Ecommerce in Russia to near 30 billion euros by 2018

The B2C ecommerce industry in Russia has been growing rapidly. As a matter of fact, it was ranked fifth worldwide in ecommerce growth last year. Russia is now forecasted to surpass South Korea to become the ninth largest ecommerce market worldwide. And in 2018, the industry could be worth 30 billion euros.

Many global retailers are keeping an eye on Russia, as it is a very interesting market. It has the potential to be a huge ecommerce industry and that’s the reason major online retailers like eBay and Rocket Internet are investing heavily in this market. It’s no surprise we wrote “Russia could be the next big ecommerce country” back in November, 2013.

At the moment Russia’s ecommerce industry has its problems. The current political climate has its effects on the country’s economy and thus the online retail industry. And at the beginning of this year the country made some changes in the customs procedures which will impact shipments sent to Russian customers. And because of that, online stores from abroad might sell less in Russia than before. 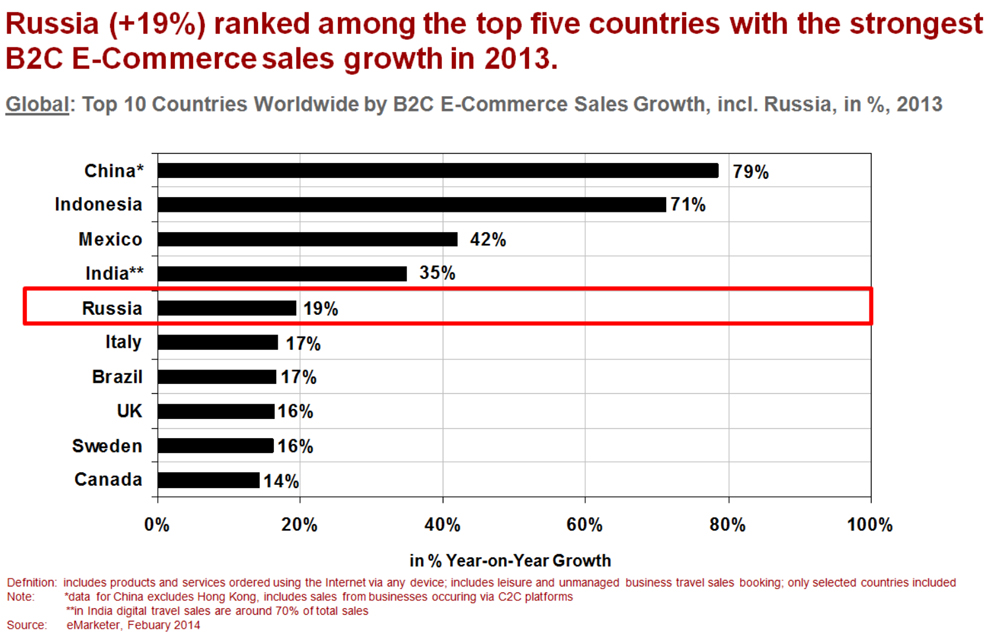 Russian ecommerce sector is growing hard
But still, the Russian ecommerce sector is growing hard. When you look at the BRIC countries Brazil, Russia, India and China, Russia is ranked first in terms of online spending per shopper and internet penetration. Between 2008 and 2013, the amount of internet users grew by 100%, making it the fifth fastest growing country worldwide. Those are beautiful metrics that can make an ecommerce industry grow even harder in the next few years.

In Europe, Russia was the fourth largest ecommerce industry last year. The online retail industry of Russia was worth 9.41 billion euros back then, which was a 34% increase compared to online sales in 2012.  And now yStats.com forecasts that Russia’s B2C ecommerce sales will reach almost 30 billion euros in 2018. “Two trends that are affecting B2C E-Commerce worldwide also have their influence in Russia. The practice of shopping through a mobile device is increasing rapidly, as mobile Internet penetration increased by over half in 2013. Cross-border shopping is also a trend, as around 10% of online shoppers buy directly from merchants in Europe and the rest of the world”, the research company says.

Popular product categories and payment methods in Russia
The most popular product category in terms of online sales in 2013 was consumer electronics and appliances, followed by clothes and shoes. But the fashion segment was the leading category by share of online shoppers making purchases. “When paying for online purchases, cash on delivery continues to dominate in Russia, but payment by credit or debit card as well as alternative methods are on the rise.”

Popular online stores in Russia
According to yStats, the top 5 of Russian online shops, in terms of revenues last year, were electronics merchants Ulmart and Citilink, fashion retailer Wildberries, mass merchant Ozon and coupons dealer and retailer Biglion.  Alieexpress.com, eBay and Amazon are among the most popular online retailers from abroad.