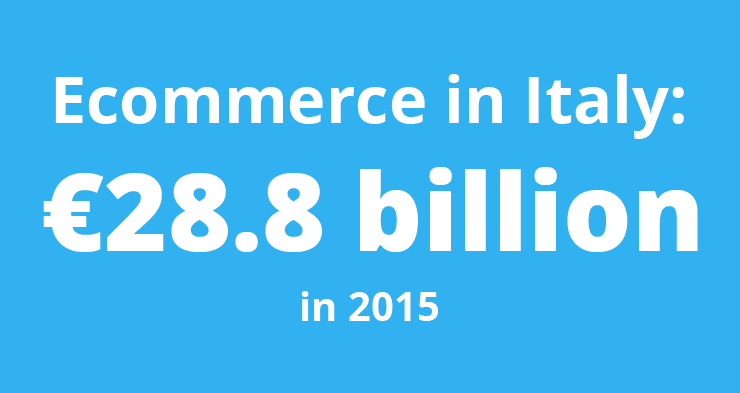 The turnover from ecommerce in Italy is estimated to have been worth 28.8 billion euros in 2015. This means the turnover of online sales in Italy grew by 19 percent compared to 2014. Most revenue was generated by foreign players and big marketplaces like Amazon.

This is shown by research from Casaleggio Associati. It presented its research called “E-commerce in Italy 2016” to ecommerce players during a conference at the Chamber of Commerce of Milan. It was the tenth edition of the annual ecommerce study, which was now dedicated to the company’s founder and CEO, Gianroberto Casaleggio, who passed away on 12 April.

The online shopping centers saw their turnover increase by 140 percent, making them the sector with the highest growth in Italian ecommerce. The food industry also saw strong growth numbers, as this industry grew by 77 percent compared to 2014. Last year, the consumer electronics industry suffered a decrease of 15 percent compared to the year before.

These are the expected growth percentages for 2016:

Part of the research was dedicated to conversion rate optimization. Two-thirds of Italian merchants try to simplify the purchasing process in order to improve the conversion rate. Four out of ten online retailers think giving the customers a sense of convenience and offering them support during the purchase process are other important factors that could boost the conversion rate.

“Last year, the mobile commerce confirmed its important role in the online sales in Italy, following the trend already seen in foreign markets”, Casaleggio Associati writes. Mcommerce accounted for 22 percent of ecommerce in Italy last year. In 2014, the share of mobile ecommerce was just 13 percent. “This growth comes as a result of the fact that Italian people are more confident with mobile devices and they are more inclined to complete purchases on mobile.”