Ecommerce sales in the Netherlands are up by 8%

September 18, 2013 by Ecommerce News. About Statistics with tags The Netherlands. 3213 views.

Ecommerce sales in the Netherlands grew to 5 billion Euros in the first six months of 2013, a growth of 8% compared to the same period one year ago. Although the growth flattens slightly when you compare it with previous years, it´s still a good ecommerce year for the Dutch. Especially when you take into consideration the country is still in a recession and consumers now aren’t that eager to spend money.

Numbers are coming from the Thuiswinkel Markt Monitor 2013-1, a half-yearly research on behalf of the Dutch online retail association Thuiswinkel.org. According to chairman Ed Nijpels the ecommerce industry isn’t affected at all by the still ongoing recession. “We, as well as the retailers, are seeing plenty of growth opportunities in this industry. The consumers are getting more and more confident about shopping online and the experienced customer is coming back more often.”

Amount of orders grows with 10%
The increasing number of orders accelerates the ecommerce sales growth the most. There were about 46 million orders places in the first six months of 2013, a growth of 10% compared to the same period one year before. The average online shopper ordered five times this period (growth of 7% yoy), while spending 109 Euros per order. 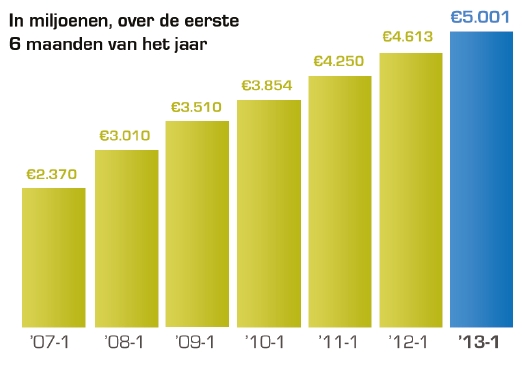 Slightly more than half of total online revenue consists of the sale of products like clothing and books. The turnover of online products increases harder (+11%) than the turnover of online services like travel, insurance and plane tickets (+6%). The number of people who ordered a product or service online also increased, now there were 8.8 million Dutch who have made an online purchase in the first six months of 2013, last year that number was about 8.5 million.

It’s expected the online shopping industry will still grow in the second half of 2013, with ordering via smartphones and tablets as a huge accelerator. Consumers will be online more often and for longer periods so they could do their research and place an order.