The ecommerce industry in Sweden has increased significantly last year, and it now accounts for a respectable part of all Swedish retail sales. The growth of Swedish ecommerce in 2013 has been the largest since 2007. Last year this business increased with 17 percent to 37 billion Swedish kronor, eg. 4.17 billion euros.

This can be read in E-barometern 2013, a study from PostNord in collaboration with Svensk Digital Handel and HUI Research. In this report we also see that growth in the fourth quarter of 2013 was 18 percent, a huge improvement from the 13 percent in the quarter before that. 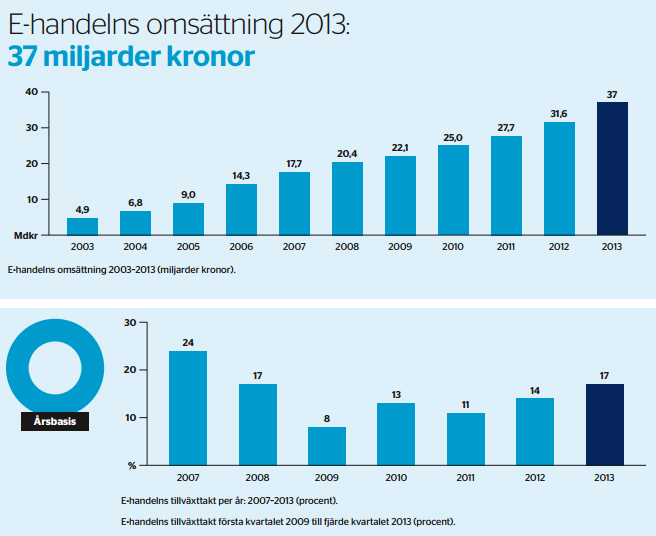 When asked the question “what have you purchased online in 2013”, the most respondents answered “books”, followed by clothing, consumer electronics, computers and computer accessoiries, films, cosmetics, video games, cd’s and furniture. Almost three in ten online consumers purchases goods on the internet at least once a month.

Active customers in upper north of Sweden
According to the researchers, ecommerce is widely distributed throughout Sweden, but the most active ecommerce customers can be found beyond the country’s biggest cities. It is mainly households in Norrland’s inland municipalities that most frequently order goods online. The list is topped by the municipality of Storuman, where an average household got 12 packets delivered to them last year. Big municipalities like Malmö and Stockholm can be found at the bottom of the list with respectively 5.9 and 6.2 packages per household.

Mcommerce Sweden is gaining more and more ground
Approximately one in ten consumers bought something online by using their mobile devices. Among the more frequent online shoppers, those who order something online at least once a months, this percentage was about 22 percent. Clothes were clearly the most popular product category to shop for using a smartphone or tablet.

Eight out of ten online shoppers answered that it is very important it’s clear what the total price will be, in order for them to shop at an online store. Order important reasons for Swedish consumers to buy something at an online store are clear product information and the fact goods are easy to find on the site.

One in four consumers have at some point over the past year returned an item they bought online. Among those who shop online at least once per month, this percentage is even higher: 41 percent. Especially clothes get returned a lot, that is also why there are more women than men returning goods they bought online.

The study also looked at foreign consumers. It turns out that last year nearly three percent of Britons (1.5 million consumers) have every shopped online from a Swedish online store, making them on top of the list, that is followed by Germans (1 million) and Norwegians (0.6 million).

Alltogether, ecommerce now accounts for 6 percent of total retail sales in Sweden. When the grocery industry is left out of the calculation, the ecommerce share is about 10 percent.

In September 2013 we wrote an article about how Swedish ecommerce continues to grow. In this, we wrote: “Ecommerce in Sweden could face a total growth of 18 percent and a turnover of 37,3 billion Swedish Kronor ((€4,3bn) this year.” And yes, that actually happened.