Ecommerce in Switzerland was worth 6.6 billion euros in 2015

March 4, 2016 by Ecommerce News. About Statistics with tags Switzerland. 7552 views.

Swiss online shoppers bought goods online with a total value of 7.2 billion Swiss francs, or 6.6 billion euros, last year. The online retail sector in Switzerland increased by 7.5 percent in 2015 and now also accounts for 7.5 percent of the total retail sector in this Central-European country.

That is the result of a total market survey conducted by Swiss ecommerce association VSV in cooperation with GfK and Swiss Post. It concluded that the shift of stationary retail to online trading continues and that cross-border ecommerce is gaining importance increasingly.

As said, 6.6 billion euros in sales were generated in the online and mail order retail industry in Switzerland, which is 7.5 percent more than the online revenue was in 2014. When looked at the last five years, the Swiss ecommerce industry retail grew by 1.8 billion Swiss francs. Meanwhile, the stationary trade lost 2.5 billion francs. 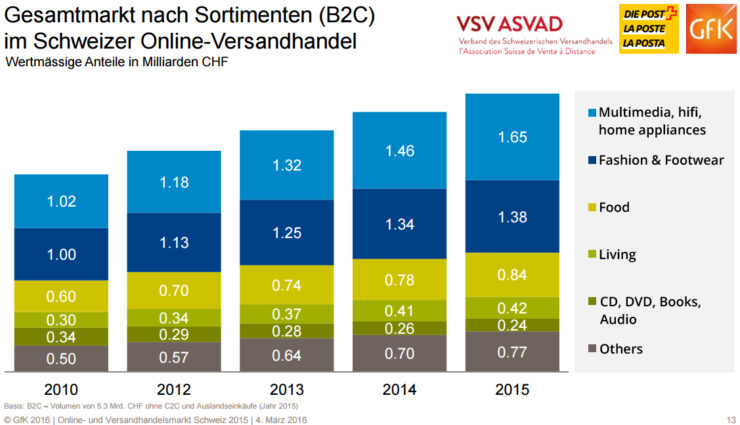 1.1 billion CHF went to foreign online stores
Of the 7.2 billion Swiss francs that were generated in the online retail industry in Switzerland, 5.3 billion came from consumers who shopped at online companies (B2C), 1.1 billion went to online stores abroad and 800 million Swiss Francs were generated at auction sites and online marketplaces. In addition, goods with a total value of an estimated 250 million Swiss francs were picked up at parcel stations abroad.

The researchers looked at online and mail orders by Swiss consumers and of all these transactions, 90 percent was conducted online. Of these online transactions, a quarter happened via mobile devices.

Outlook for ecommerce in Switzerland for 2016
For 2016, VSV, GfK and Swiss Post expect further growth of 7-10 percent, while the offline textile and electronics industries will be under great pressure with falling sales per m². Also, they expect the price level will continue to fall with enormous competition with new players (from China).