Facts & figures about ecommerce in Poland

Poland is one of Europe’s fastest growing ecommerce markets and it’s also a very strategic geographical location for those who would like to expand further into the Eastern European market. Software development company Dotcom River took a very good look at the ecommerce market in Poland and released a study, of which we’ll show the most important results.

The report [pdf] is the result of a 3-year study, involving almost 14,000 Polish e-retailers and online consumers. Two months ago, we wrote that Polish ecommerce is now worth 5.9 billion euros and that it’s estimated the market will grow to 7.17 billion euros this year. According to Piotr Jarosz, CEO of Dotcom River and executive editor of the report, the figure is predicted to rise in two years to nearly 11 billion euros. So you see, the ecommerce industry in Poland is indeed growing fast.

Ecommerce in Poland isn’t that popular if you look at its share in the entire Polish consumer trade, which is about 4%. But still, over 30% of the 38 million population of Poland shops online, which is a higher number than for Spain or Italy for example. There are over 12 thousand online shops in Poland and Jarosz states the market continuously matures, as evidenced by the decreasing growth rate of online stores.

Buying food online in Poland
“However, we can’t conclude the market is saturated. This is clearly visible in the food sector, which in recent years has been developing most rapidly.” The number of online stores in this sector has been growing by about 35% each year since 2007. Huge Western supermarkets like Tesco (UK), Auchan and Leclerc (both France) have already enables Poles to buy their products online.

Big online stores in Poland
But it’s not only supermarkets from Western Europe who have discovered the Polish ecommerce market, there are other big players like Otto, Zalando and Amazon who, one way or the other, found their ways to Poland. The researchers also made a list of the biggest online stores in Poland, which is listed below.

Polish ecommerce consumers
Almost two in ten Polish consumers have less than one year experience in online shopping, while 27.6% has between one and three years of experience. Almost four in ten consumer shop online for at least three years. When looking at the frequency of online shopping in Poland, there are three in ten people who on average, shop at least a few times per month. Almost sixty percent shops only a few times during the year. Poles like to shop online because it’s convenient and saves them time, prices are more attractive than in traditional stores and they like to compare many products before they make a purchase.

The ecommerce turnover in Poland is, according to Dotcom River, estimated to be about 6.2 billion euros, which is 21% more than in the year before. If you don’t believe ecommerce in Poland is growing fast, then know that the industry was worth 78.6 million euros ten years ago, which is only 1,3% of the current value. 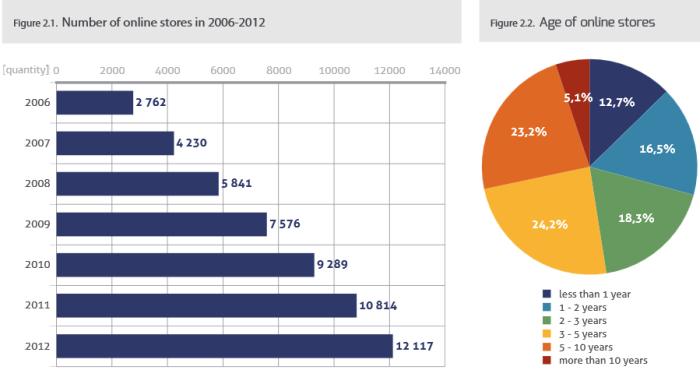 Popular product categories in Polish ecommerce
But as stated before, the growth rate of Polish ecommerce has slowed down in the last couple of years. “The largest decrease in the growth rate can be found in the electronics industry and book stores (9%), while the delicatessen (17%) and clothing (14%) are leaders of the relative increases.” The most Polish online stores can be found in the House and Garden industry, followed by Presents and Accessories, Clothing and Health and Beauty. More than four in ten online stores also sells offline.

Cross-border selling isn’t really common in Poland, as only every third of Polish shops sells products in other EU countries. According to Dotcom River this is “due to the fact that “unfortunately, many companies are not able to overcome the major barriers of cross-border ecommerce, which are mainly time and cost of international transport.” But logistics isn’t the only problem, there are also language differences, different currencies, taxes and of course the challenge of gaining the trust of the foreign client, the report states.

Expanding to Poland?
If you would like to expand your business to Poland or to start a new online store over there, it may come in handy to know which business sectors reach the highest trade margins. In Poland it’s Gifs and Accessories (26% margin), Clothing (25,8%) and Delicatessen (23,2%). According to the study, at least two thirds of online shops in Poland are profitable and almost 60% thinks sales figures will increase this year.

Online payment methods in Poland
For the first time in years, the Polish payment market has begun to follow European trends, Dotcom River notes. “The visible success of online transfers suggests that currently our market is evolving in the direction of the Dutch model, in which solutions like Pay-By-Link (iDeal in the Netherlands) are commonly used.” But cash-on-delivery payments and bank transfers are still very popular online payment methods in Poland. 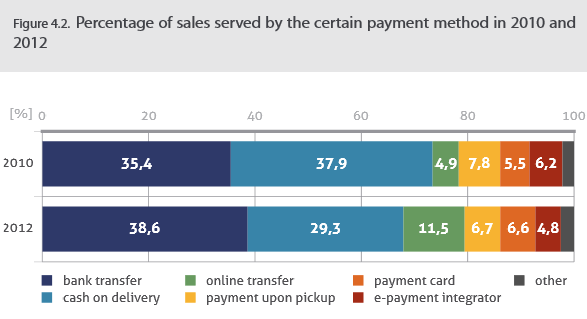 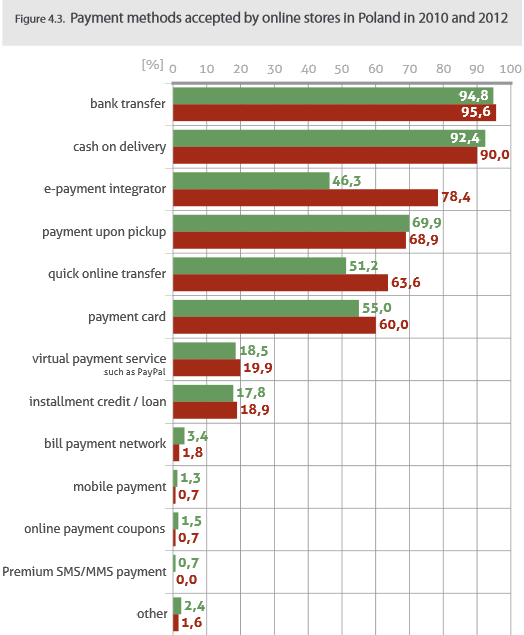 Popular carriers and shopping cart software in Poland
More than half of online stores in Poland receive on average 100 orders per month, and only 7.8% carry out more than 1,000 orders. With regards to courier services, UPS seems to be the most popular one, followed by DPD and DHL.

When looking at the shopping cart software, Dotcom River found out that the popularity of SaaS platforms has basically doubled since 2009 (from 14.4% to 29.1%). The leader of SaaS platforms in Poland is Shoper, the leader in open source software is, as every year, osCommerce, but this one is getting some serious competition from PrestaShop.

The popularity of licensed software with self-hosting has dropped by more than 10%. Now there’s only 15.9% of store owners who decided to purchase a license to build their online businesses. The leader in licensed software are SOTE, KQS. Store and i-shop.