The FEVAD, the French association of ecommerce and distance selling, published its yearly infographic, which consists of four pages of ‘chiffres clés’ about the French state of ecommerce. Let’s have a look at some of these 2013 figures.

With 138,000 ecommerce websites, France is the sixth most developed ecommerce market in the world. And in Europe, France is the third biggest market with €51,5 billion sales in 2013. The growth percentage was 13,5% compared to the same period the year before. And two-thirds of the aforementioned 138,000 websites sell for less than €30,000 a year. Only 800 websites, a half percent of all online shops, sell for more than €10 million a year. But these 800 ecommerce sites account for 67% of all online sales in France! 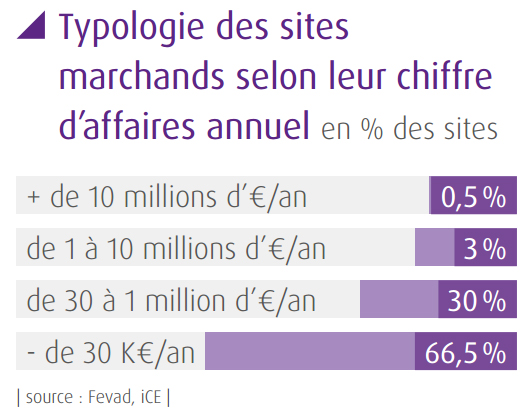 Online behavior and spendings
Almost six in ten French people buy online, this corresponds to 33,8 million persons. Online sales now account for 8% of the total French retail market when excluding the sales of food (5,5% when including food). House equipment, including consumer electronics, and fashion, shoes and textiles have the biggest market shares (18% and 12%).  Amazon, Cdiscount, FNAC, eBay and Priceminister were the most visited ecommerce sites in France during 2013.

Amazon seems to receive 16 million unique visitors per month, which is 6 million more than number two Cdiscount. Reading our article about the French ecommerce top 100 might teach you more about the top players in France.

The French spent on average € 1515 on the internet. Almost 18 times the shopping cart got filled, with an average amount of €84,50. The average basket value went down with 3,5%. Six years ago, the average basket value was at its highest with almost €92. The French usually pay with the ‘carte bancaire’, a credit card or French bank card. Delivery at home, pick up at a delivery point, printout of reservations were the most preferred kind of deliveries.

During 2013 mobile commerce grew with 160% totaling up to 5% of the French ecommerce market. But when the market leaders speak about the first quarter of 2014 they say their mobile sales were already 19%, so that’s very promising.

Market places and cross-border
2013 was a big year for market places in France. Their growth almost doubled, while the penetration is 32%. Almost three in four online retailers sell on Ebay, 59% sell on Amazon, 25% on Priceminister, 25% on Cdiscount and 22% on Le Bon Coin. Sales volumes through market places went up with 50%. When we only look at the first quarter of 2014, it shows that 30% of the French people bought something from a market place. 57% of the ecommerce players also sell across French borders.

Growth numbers of 2013
The number of the so called ‘active’ ecommerce sites grew by 17%. Overall sales grew by 13,5% and the number of transactions grew by 17,5%. Thanks to ecommerce 12,000 new jobs were created in France last year. And by the end of 2013 there were about 87,000 ecommerce jobs in France. But not everything is growing, as we mentioned earlier, the average basket value keeps on going down.

How about the year 2014?
A few words about C2C and B2B. The share of people that already did business with another private person (aka C2C or consumer-to-consumer) was 48% last year and this year it’s not about to change. It seems like an interesting high percentage, but the FEVAD report doesn’t give any more information.

France seem to be a pretty bad B2B-player, as only 20% of French companies buy online. As a matter of fact: together with Greece, Romania and Portugal, France has the lowest European percentage. 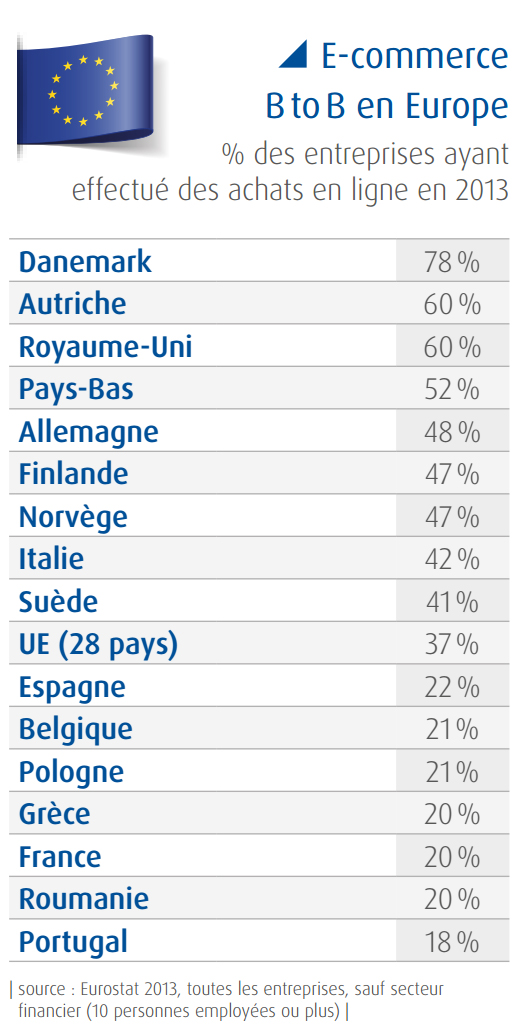 As mentioned before there are some interesting perspectives, maybe even chances, for mobile, market places, and cross-border sales. When it comes to 2014, only 13% of the French people said they would buy more often on the internet. New job hirings for this year are considered by 70% of all French ecommerce sites. And it’s estimated the French ecommerce market will be worth €57,5 billion at the end of this year, which would correspond to a growth of 11,6%.