British consumers spend almost five times more when they shop for groceries online than they do in-store. For now, the United Kingdom is the leader in the field, but by 2016 France will overtake the UK, thanks to the impressive growth of the click and collect offer in France.

This is apparent from a new report from market research company Kantar Worldpanel. It predicts ecommerce will account for 39.13 billion euros of global fast-moving consumer goods sales by 2016, an increase of 47% on the current 26.58 billion euros.

Ecommerce = opportunity
Stéphane Roger, who works as Global Shopper and Retail Director at Kantar Worldplanel, says that “although online only makes up a small share of FMCG sales at the moment, all countries are witnessing considerable growth.” Ecommerce must be seen more of an opportunity than a threat for retailers, the report suggests. Having an online store can help retailers secure additional revenues. Because online grocery shoppers spend more because of what makes them go online – typically, planned purchases for restock and replenishment. 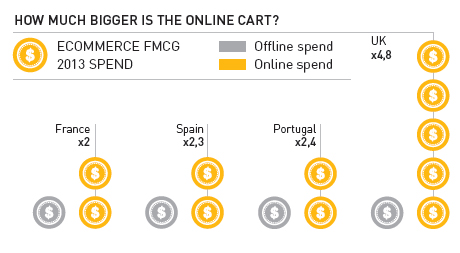 Online shoppers spend on average twice as much as in-store, with Brits spending the most, 4.8 times as much. And online consumers tend to be more loyal than those in-store. For example, online shoppers at Tesco spend almost half of their total grocery budget with the UK’s largest retailer, but the average offline Tesco shopper spends just 29 percent.

France will surpass the United Kingdom
Although the UK is the European number one with regards to the online FMCG market, the country will soon be overtaken by France, which shows an impressive growth of the click and collect offers, locally referred to as “Drive”. (Two months ago, we wrote that the number of Click & Drives, went up to 2031 in France and that they now outnumber the hypermarkets.) France will surpass the UK by 2016 with 6.1% versus 5.5% of market share respectively. 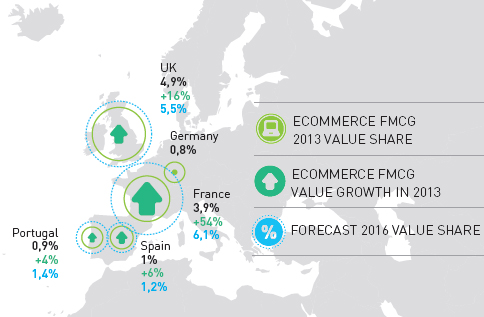