Ecommerce Europe, the umbrella organisation for European online retailers, estimates that ecommerce represented 3.5% of the total Gross Domestic Product of Europe in 2012. It’s likely to double by 2016 and to triple by 2020. The organisation also estimates that 2 million jobs in Europe are created, directly and indirectly, by the B2C ecommerce sector.

According to the organisation Europe is now the largest B2C ecommerce market in the world, as it overtook this position from the United States in 2010. Upcoming ecommerce markets in Europe are Spain, Italy, Poland, Russia, Ukraine and Turkey. Alltogether the European countries grow at a pace of 15% to 20% per year.

According to vice-president Wijnand Jongen, growth in Europe can easily be explained. “The Scandinavian countries, the Netherlands and the United Kingdom in particular have a head start as far as Internet usage and mobile devices is concerned. These mature countries are scoring very high for both e-commerce and m-commerce. In these countries 70 to 80 per cent of Internet users are e-shoppers and Internet penetration is 90% or higher. Their growth figures are currently 10 to 15 per cent.” 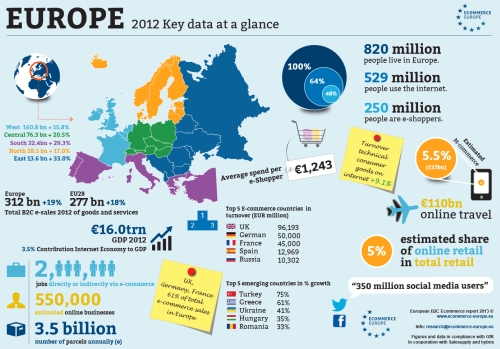