No right of withdrawal for ecommerce in Switzerland

September 19, 2014 by Ecommerce News. About Laws and regulations with tags Switzerland. 5011 views.

The Federal Council of Switzerland wanted to introduce a right of return for the local ecommerce industry, just like has happened in the majority of Europe, but the National Council was against it. Even if this meant Swiss consumers would be disadvantaged against EU citizens. But for purchases over the phone, customers still have some important rights.

The National Council doesn’t want to introduce a general right of withdrawal for goods that are ordered online. A conservative majority was against such “patronizing of the consumer”, writes the Swiss Parlament. For purchases that take place over the phone however, customers are entitled to withdraw from the contract within fourteen days.

Right now, the Swiss law only provides the right of withdrawal for so called doorstep sales. The Senate wanted to extend these regulations also for products bought on the telephone or via the internet. But in the National Council, the bourgeois parties rejected the introduction of the right of withdrawal in online trading: 95 votes were against said introduction, while 84 were for this rule.

“We refuse to patronize the consumer”, said Giovanni Merlini from the liberal party FDP.Die Liberalen. “Someone could get caught off guard at the front door or whenever they buy something over the phone, but not when you order something online. Because there, the first step to conclude a contract would be initiated by the consumer. Therefore they have all the time to think about buying”, Merlini argues.

Swiss consumers are disadvantaged in relation to EU citizens
Minister of Justice Simonetta Sommaruga agreed there’s no such surprise in online trading but the problem however was that the customer can’t see the product he’s buying. Sommaruga also argued that in addition, the Swiss are currently disadvantaged in relation to EU citizens. Because since June there’s a general right of withdrawal that lasts 14 days in the European Union. “If a German or French customer orders something online from a Swiss retailer he has a right of withdrawal, while a customer from Switzerland has not.” According to her this discrimination has to be fixed.

The proponents of a general right of withdrawal emphasized the growing importance of ecommerce. Excluding the internet in such law is therefore “so archaic, as if we were talking about the telegraph”, said Jean Christophe Schwaab from Parti Socialiste Suisse.

Right of withdrawal for telephone sales
Services such as Skype were used as an argument against different rules for telephone orders and online orders. “The distinction between a telephone call and an voice call over the internet is already difficult and in 2020 this will be even more difficult”, said Beat Flach. Minister of Justice Sommaruga spoke in this regard of a mission impossible. Largely undisputed however, was the extent of the right of withdrawal for products purchased over the phone. The National Council decided by 106 votes for and 70 votes against this expansion of consumer rights. 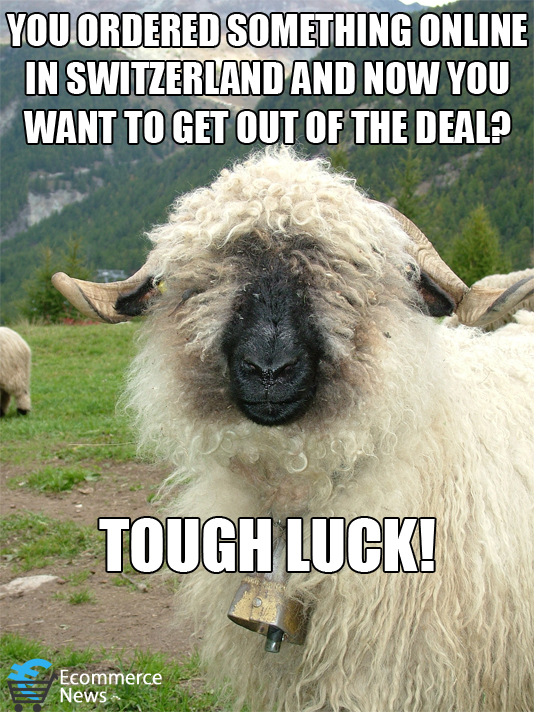