It’s going extremely well with the ecommerce industry in Northern Europe. The total online economy of sold goods and services amounted 28.4 billion euros in 2012, but is expected to grow to 31 billion euros at the end of this year.

We’ve got this data from the new Northern Europe B2C E-commerce Report, published by Ecommerce Europe. The Northern European countries (Sweden, Denmark, Finland, Norway, Iceland, Estonia, Latvia and Lithuani) now account for 9.2% of the total European market, which makes the Northern European region the third biggest region. The total B2C ecommerce industry in this region amounted 28.4 billion euros in 2012, which was a 10% growth compared to 2011. And now it’s expected to surpass the 31 billion euros mark, a growth of 7.1% compared to last year.

Denmark biggest ecommerce industry in Northern Europe
Although there are eight countries in this region, there are only four of them that has a mature ecommerce market: Denmark, Sweden, Norway and Finland. It’s expected that Denmark will reach a total online sales of €8.3 billion this year. That’s more than Sweden (€8.1 billion), Norway (€7.6 billion) or Finland (€5.6 billion) are expected to reach in 2013. Those are billion markets, something we can’t possibly say about the smaller Northern European countries. The Baltic states and Iceland have online sales between €100 million and €300 million each. But, when we just focus on growth, these countries are doing very well, as they are showing ecommerce growth between 20% and 30% this year. 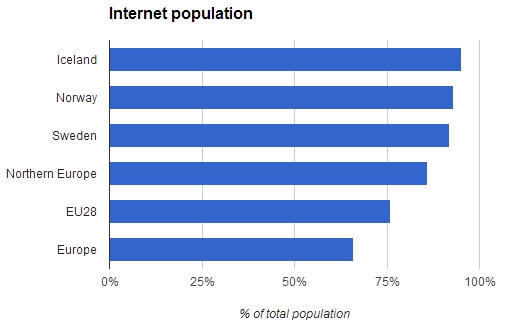 According to research from Ecommerce Europe 19 million consumers in the Northern European region bought goods and services online in 2012. The average e-household in this region spend a total of €2,145 last year, which is above the European average of €1,400. Check out this graph to see more average spends in the region and Europe. 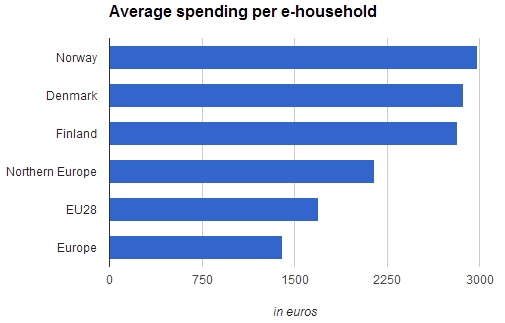