Ecommerce Magazine, in colloboration with Ginger, collected information from 150 companies between March 15 and May 15 this year. Although Ecommerce Magazine tried to be thorough, big names like Amazon, PriceMinister, eBay, Fnac, Groupon, Carrefour, Darty and Sarenza are absent from the list as they did not want to communicate their data.

And that’s where the second part comes in. Four key sectors, e.g. travel, high tech, fashion and retail, have been isolated to focus on the real ecommerce actors. The missing sales figures have been bypassed by using estimates. Also, the study sometimes considered the period July 2012 – June 2013, while on other occasions numbers of the full year 2013 seem to have been used.

French ecommerce leaders
Whatever the case may be, the French leading ecommerce companies are the French Railway group VSC (€3,4 billon), Vente-privee.com (€1,6 billion), Cdiscount.com (€1,4 billion),  Air France (€1 billion) and Accor (€520 million). But when adding the estimates, it becomes clear that the Odigeo group is the leader. This company’s sales were estimated at €4,5 billion which is €1,1 billion more than the French Railways. On June 20th Odigeo itself communicated their sales being €4.384.

You can download the full Top 100 French Ecommerce 2014 here. Let’s have a look at the different sectors.

Travel
As said the Odigeo group – with companies like Go Voyages, Opodo and eDreams – is the biggest player in Travel in France. Second place is for Sncf Voyages (VSC). 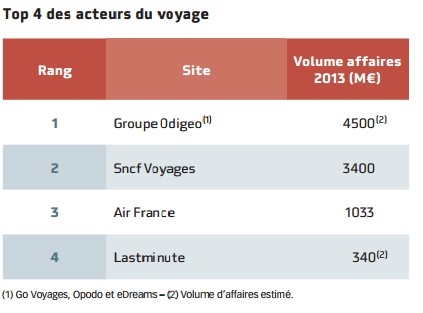 In its research, Ecommerce Magazine mentions the results of the European Online Travel Overview Ninth Edition,  held earlier by PhoCusWright. Market penetration of French online travel was 45% in 2013 and should grow to 48% next year. Sales in this sector were €20 billion last year and should go up to €23 billion in 2015, which then should account for 18% of the European market.

High Tech
Also the ecommerce sales of Fnac, LDLC, Boulanger and Mistergooddeal could only be estimated. Fnac is leading the French ecommerce high tech sector with € 530 million. But you’ll see later in this article that we should not forget the importance of Amazon in France. 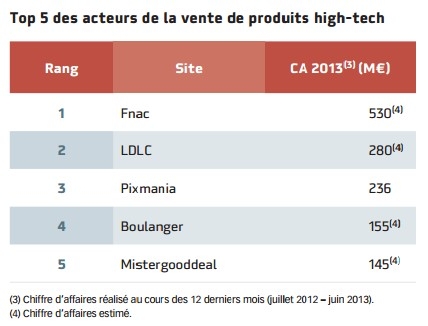 Ecommerce Magazine stipulates the research by the FEVAD on ecommerce market places in France. When looking at the 40 biggest ecommerce players, market places accounted for 15% of the online sales.

Fashion and Shoes
Sales of Zalando, Vertbaudet, Sarenza and Asos also got listed by using estimations, only Spartoo was willing to collaborate. Zalando is approximately leading this sector in France. Runner-up is the multichannel childrens wear group Vertbaudet. This company was founded in 1963 and is based in Tourcoing, part of urban community Lille Métropole. The company has approximately 80 stores and corners in France and Germany (Babywalz). Vertbaudet was sold in March 2013 by the Kering group (formerly PPR with luxery brands like Gucci and Saint Laurent) together with another French apparel company, Cyrillus, to Investor Alpha Private Equity Fund 6. 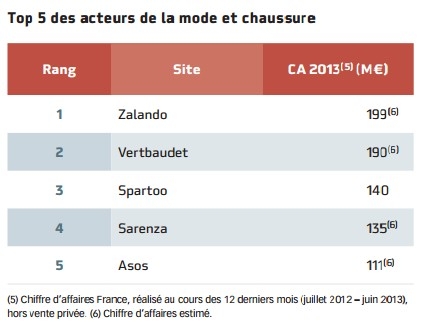 A study of the Institut Français de la Mode is mentioned to tell us that online sales of fashion and shoes were close to € 4 billion in 2013. Online sales grew 15%, while overall growth was 2%. French spend almost 13% of their budget for cloths online.

Retail
The top 10 online retailers in this sector are Leclerc, Carrefour, Auchan, Darty, Casino, Decathlon, Cora, Magasin U, Boulanger and Conforama. A study of Xerfi-Precepta is quoted to say that more than 75% of the French retailers have an ecommerce site. Some well-known retailers that still not play the ecommerce game: Lidl, Aldi, Brico Dépôt, Weldom, Printemps, BHV Marais, Schmidt, Cuisinella and Mobalpa. 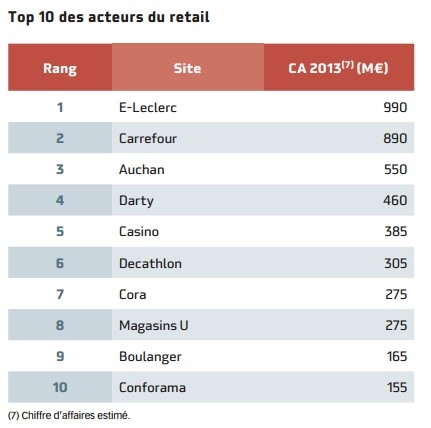 The sales figures of Amazon in France can only be estimated. Ecommerce Magazine says it is probably close to €1,5 billion. If that’s the case, than Amazon figures among the top 5 ecommerce players in France, somewhere between Cdiscount.com and Vente-privée.com. Final remark: we can only guess about the sales figures of Ebay in France as no figures at all were mentioned.