eMAG, the largest online retailer in Romania, and local supermarket chain Mega Image have joined forces by launching an online supermarket. Romanian customers can order food, home care and personal care products that are also available in the traditional supermarkets from Mega Image.

Mega Image is the Romania-based subsidiary of Belgium-based Delhaize Group, which also operates Cora hypermarkets in the Eastern European country. The supermarket chain was established in 1995 and owned by Delhaize since 2000. It operates about 300 stores under the name Mega Image and it now has an online supermarket, eMAG, together with the online retailer of the same name. eMag was launched in 2001 as an online store for computer systems and office products, nowadays it’s one of the largest online stores on the Romanian market.

As Romania-Insider.com writes, customers have two options for the orders they place on the online platform: they can have their goods delivered at home in 24 hours or they can pick it up at a Mega Image supermarket. Online orders will be delivered aross the entire country for a charge of 15  Romanian leu or €3.40. In Bucharest home delivery is free for orders over 300 Romanian leu (€68).

Very competitive grocery ecommerce market
According to RetailAnalysis “the Romanian grocery ecommerce market, shaped by retailers like Cora, Metro Cash & Carry and Carrefour, is one of the most competitive grocery ecommerce markets in Central and Eastern Europe, after Poland.”  The online supermarket of Cora launched in 2010, while its pick-up point Cora Drive opened three years later. Metro Group’s Metro Office Direct launched in January 2012 and gave consumers the opportunity to order stationary products, electronics, cleaning products and a limited number of food products. The German retail and wholesale corporation installed online kiosks in some of its stores in Romania last year. Meanwhile, Carrefour launched an online supermarket in April  2013. 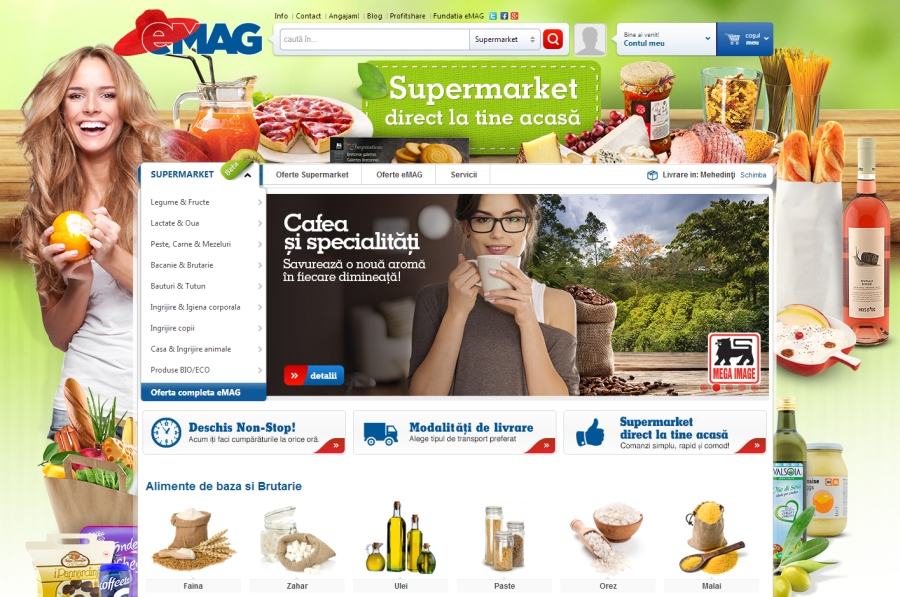