That’s what Deloitte analyst predicted and something Puls Biznesu, a daily newspaper devoted to business and economic issues, wrote about. “Although ecommerce in Poland played a small role a few years ago, we are now one of the fastest growing markets in Europe.”

According to estimates of Polish Internet Research, the share of ecommerce in the total retail sector stood at 2.5%. That’s small compared to European leaders like the United Kingdom (10.7%) or Germany (8%), but the difference between Poland and these countries decreased rapidly. As a result the share of Polish ecommerce sales rose to 4.7% in 2012. It is said that the Polish ecommerce market is growing by more than twenty percent every year.

Poles are interested in ecommerce
And based on a report from Gemius in December 2013 that looked at the ecommerce websites traffic in the Central European countries Poland, Hungary, the Czech Republic and Slovakia, it seems that Polish people are most interested in online shopping. Over 80 per cent of Polish users visited sites that were related to ecommerce. 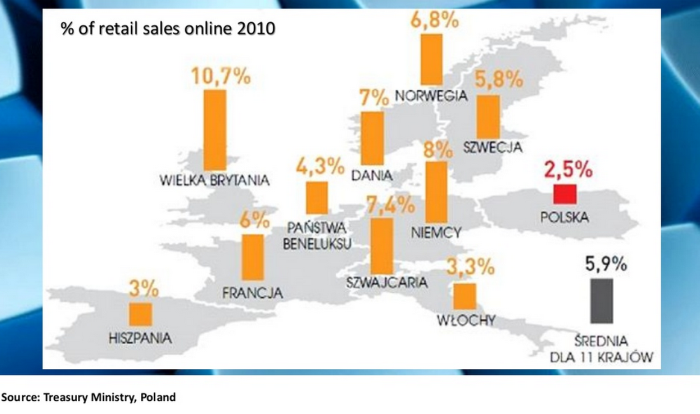 Don’t forget to read more about the overall ecommerce industry in Poland and our latest news about Polish ecommerce!