The ecommerce industry in Sweden continues to grow strongly. Online sales in the first quarter of 2014 increased by 16 percent and this growth was especially noticeable in sectors that previously had limited online sales. Predictions are the ecommerce turnover of Sweden will reach 4.70 billion euros this year.

Seven out of ten consumers bought something online in the first quarter of this year. The most popular products to order online during this period were clothes, consumer electronics, books and media. But more and more consumers are choosing to buy more bulky goods, such as building materials, furniture and appliances via the internet, and it is in these industries, growth is strongest at the moment. This is revealed by research from HUI together with Post Nord and Svensk Digital Handel.

During the first three months, 71 percent of all Swedish consumers shopped online. Of these, 14 percent ordered something online using their mobile phone, while 34 percent shopped online from foreign sites. One in four ecommerce related shipments to consumers in Sweden came from abroad.

Delivery in Sweden
The research also implicates that the average online consumer in Sweden except that the delivery takes no more than 4,3 days for receiving their package after an order is completed. For almost three in ten consumers it’s important to be able to get their items delivered by appointment. A lion’s share of the Swedish consumers also think it’s important they are able to choose how they would like to receive their online-ordered goods. Almost half of them generally prefer to get it delivered in their mailbox by the postman. One in four consumers in Sweden returned an item they ordered online. Returning items is something 88 percent thinks works well.

Online retail sales in Sweden 2013
Two months ago HUI released its e-barometer for 2013. It showed that Swedish online retail sales increased by 17 percent during that year, reaching 37 billion kronor (€4.10bn). Thanks to the survey it also became clear that consumers increasingly visited both physical and digital stores to plan and make a purchase. Around six of every ten consumers during last year did some research about a product in an online store before completing the purchase in a physical store. The other way around was slightly less popular: around four out of ten consumers researched a product in a physical store before buying it online. 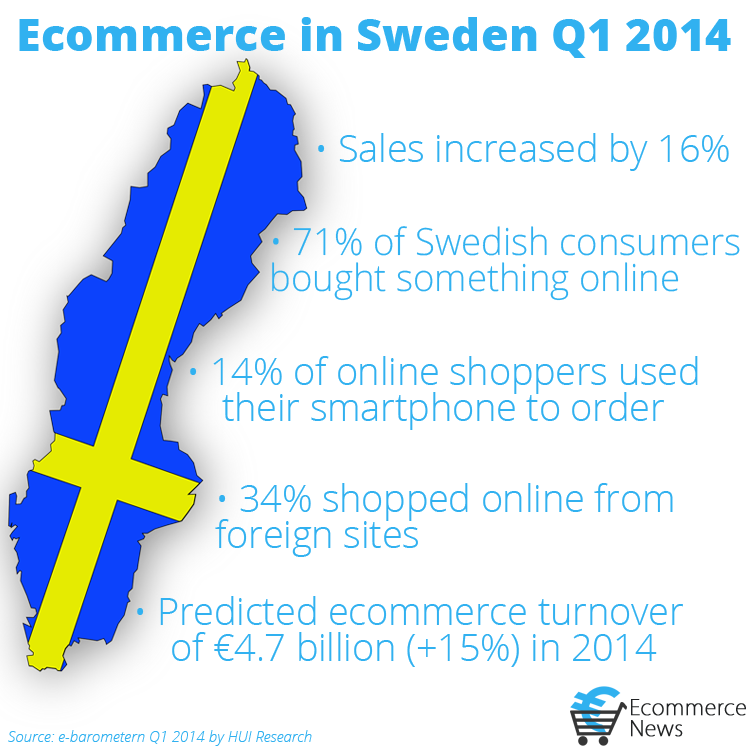