The Swedish ecommerce industry grew 19% in the first quarter of this year, compared to the same period last year. Ecommerce continues to change the Swedish retail world and every year it takes an increasing share of the traditional retail.

That’s what can be concluded after a analysis by Jetshop, a Scandinavian provider of ecommerce solutions. This company also found out that the smaller online retailers are gaining strength and that more and more purchases are made on mobile devices, such as tablets and smartphones. Shopping online from mobile devices now account for 22.6% of all purchases made online. And about four in ten visits to Swedish ecommerce sites come from consumers who are surfing on a mobile device.

When we look at the Big Data charts from Jetshop, we’ll see that the conversion rate on mobile devices is 1.42%, while the tablet (2.23%) and especially the old fashioned computer (3.69%) are clearly better for conversion. The average purchase value is also higher on tablets and computers than it is on smartphones. The average purchase value on a smartphone is €89,40, while it’s €109,46 on a tablet and €124,31 on a computer.

“More and more people are sufing on a mobile device, but still face online stores that don’t provide a good enough experience for consumers to complete their purchase using their smartphone or tablets”, says Jetshop’s CEO Christian Zander. He thinks there’s a great potential for increased sales, because the traffic is already there. Swedish ecommerce stores only need to better serve the customers’ needs. 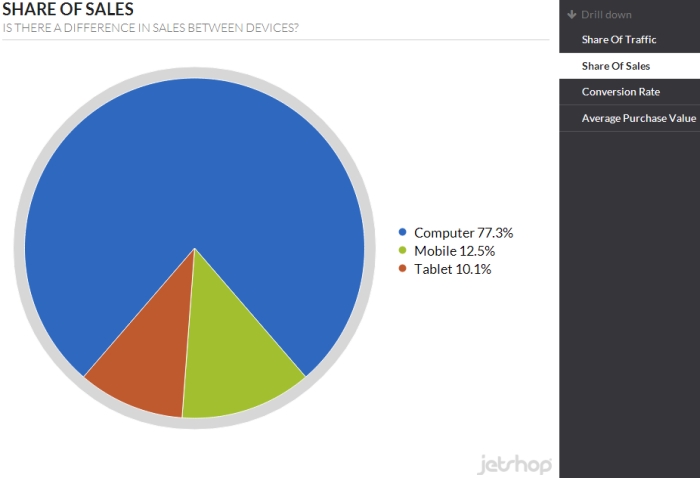