January 20, 2021 by Ecommerce News. About Marketplaces with tags Turkey.

About 98,000 businesses and 1.1 million individuals sold a total of 347 million products on Trendyol last year. The popular Turkish ecommerce platform also contributed to the creation and retention of 1.1 million jobs in Turkey.

In the same period the number of active customers on Trendyol increased significantly, from 9.2 million in 2019 tot 19.3 million last year. These are some of the conclusions drawn by a study, titled ‘Trendyol’s impact on the Turkish economy’, which was conducted by research company Politika Analiz Laboratuvarı.

Most professional sellers are small businesses

Among the 98,000 businesses, most of them (97,000) are micro enterprises and SMES, while only 1.205 are large enterprises. Together with 1.1 million individuals they sold 347 million products through the popular ecommerce platform.

Trendyol is estimated to contribute to the creation and retention of over 1 million jobs in Turkey. “After joining our platform, 90 percent of sellers increased their turnover and 82 percent hired more employees as they upscaled their business last year”, the company statement adds. Its vendors also employ about 360,000 people to fulfill the orders placed on the platform. PAL expects Trendyol’s employment impact to reach 2.4 million people by 2023.

Its employment impact will reach over 2.4 million people in Turkey by 2023.

25 percent of its sellers are female-led companies

What’s also interesting is that during the pandemic, 17,000 female entrepreneurs started selling online through the popular ecommerce platform. Demet Mutlu, the female CEO who founded Trendyol in 2010, says that 25 percent of all its sellers are female-led companies. “This is a significant achievement for us, given that only 10 percent of employers in Turkey are women”, she underlined.

In October last year, the Turkish company announced plans to expand in Europe. The expansion is set to the United Kingdom, Italy and Spain, while more markets should follow soon after. 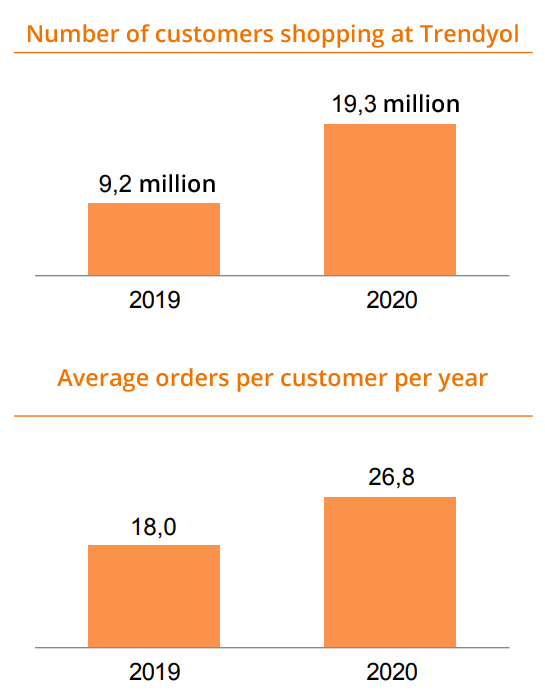