The yearly Global Retail Ecommerce Index shows that in Europe the UK, Germany and France are still the most attractive ecommerce countries to set ground in. However, the score is highly influenced by the online market size. Smaller countries such as Belgium, Denmark and Spain have less impact but do increase fast in score.

Due to the online market size of countries such as the United States, China, United Kingdom and Japan these countries dominate the list of the most attractive ecommerce countries in the world. In Europe, the United Kingdom, Germany and France are among the most interesting countries. The researchers expect the growth in the UK to slow down a bit, but Germany and France still show a great growth potential next to a great current online market size already.

‘Belgium ecommerce highest potential growth in Europe’
But when you look a little bit further, the data gets even more interesting. It also shows consumer behavior, potential growth and infrastructure. Belgium for example had some problems with their infrastructure due to laws that forbid nightwork. That might be one of the reasons that online stores from the Netherlands own a big part of the Belgium spending. They can deliver faster than the shops from Belgium itself. This law might change this year and with a market that gets more and more ready for an omnichannel behavior and with many players that make their first move online, this country might show the biggest online growth in Europe.

Their main competitor to that number one position is Russia. The country has an enormous potential but the consumer behavior or infrastructure in Russia is of less quality, according to the research of the global retail ecommerce index. Other countries in Europe that should be highlighted on the list are definitely Denmark and Norway. These countries show the best consumer behavior. If you want a market that knows what good ecommerce is like, these are the consumers you are looking for. The high adoption on ecommerce however does mean a relative smaller potential growth. The same applies to the UK, Netherlands, Finland and Switzerland. They all have a great market already but the researchers expect differences to get smaller due to a lower growth this year. 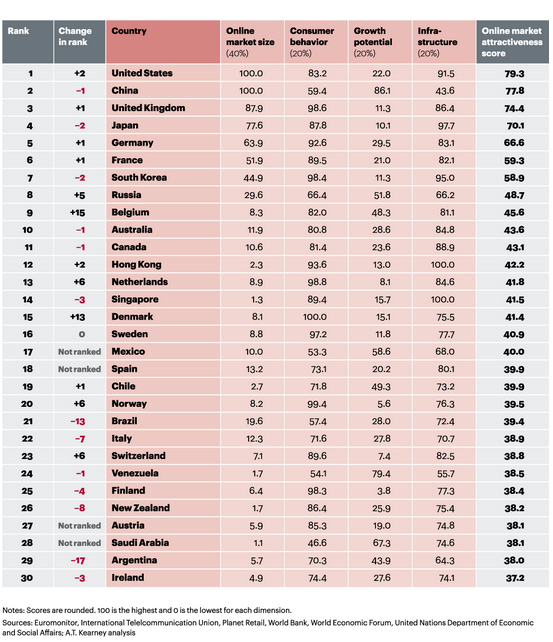