The total online economy of sold goods and services in Western Europe amounted €158.1 billion last year, but is expected to grow to €173.8 billion in 2013, according to new data from Ecommerce Europe, an umbrella organisation for online retailers active in Europe.

Western Europe, where 90 million consumers bought something online last year, is an important part of the continent. The region, which includes the United Kingdom, Ireland, France, The Netherlands, Belgium and Luxembourg, is the biggest of the four regions and has a 51% European market share. Although ecommerce in Western Europe is expected to grow again, the annual percentage growth is less big than last year. In 2012 the total ecommerce economy in Europe grew by 20% compared to 2011, while this year a growth of nearly 10% in comparison with 2012 is expected.

When we look at other Western European countries, we’ll see that Ireland is the third largest with total online sales of €4.6 billion. It’s also one of the fastest growing ecommerce markets in Europe as it shows a 25% sales growth year on year. But it may be not go entirely to Irish online stores as a quarter of Irish online spendings in 2012 went overseas. Another upcoming ecommerce market in this particular European region is Belgium, as expectations are this country will grow to 20% this year. But it’s not all roses there, because Belgium is showing relatively the lowest online sales, with €3 billion in 2012.

One reason for the fact Western Europe is doing so well with ecommerce, may be because of the high internet penetration in these countries. With 83% of its inhabitants having access to the internet it has been far above the European (66%) or EU28 average (76%) last year. For example, the Netherlands has an internet penetration of 94%, while Luxembourg and the United Kingdom are also doing pretty well with 93% and 83% respectively. 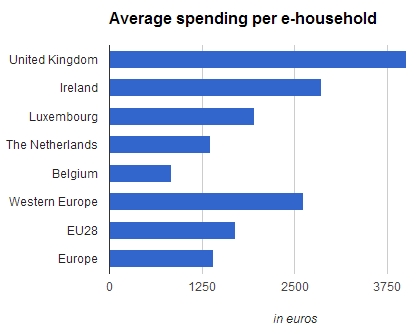