eBay and PayPal have confirmed their plans to allow merchants to accept bitcoin payments through third-party processor Braintree. In September last year, PayPal already announced it would accept Bitcoin via integration with Braintree, but now it’s official. In a long SEC filling it talks about accepting the crypto currency.

In the SEC filling, it says: “A merchant can typically open a standard PayPal account and begin accepting payments through PayPal within a few minutes. Most online or mobile merchants can onboard quickly and are not required to invest in new or specialized hardware. Our Payments Platform supports growth with a variety of value-added services designed to help businesses of all sizes manage their cash flow, invoice clients, pay bills, and reduce the need for merchants to receive and store sensitive customer financial information. For our standard service, we do not charge merchants setup or recurring fees. A merchant can also integrate with Braintree to begin accepting payments with credit or debit cards, PayPal, Venmo, digital currencies such as Bitcoin, or other payment solutions with a single integration.”

PayPal is finally accepting bitcoin
That’s the only time the word ‘bitcoin’ is mentioned in this filling. But the message is clear. As said before, it’s no surprise PayPal is finally accepting bitcoin. Half a year ago, the payments company was already hinting at bitcoin acceptance in a video and soon after that Braintree, a daughter company of PayPal, announced it would bring bitcoin to Briantree developers, “enabling their customers to pay with the alternative currency across their favorite apps”. Also, in September last year, PayPal partnered with three major bitcoin payment processors – BitPay, Coinbase and GoCoin – to allow its merchants to accept Bitcoin payments. 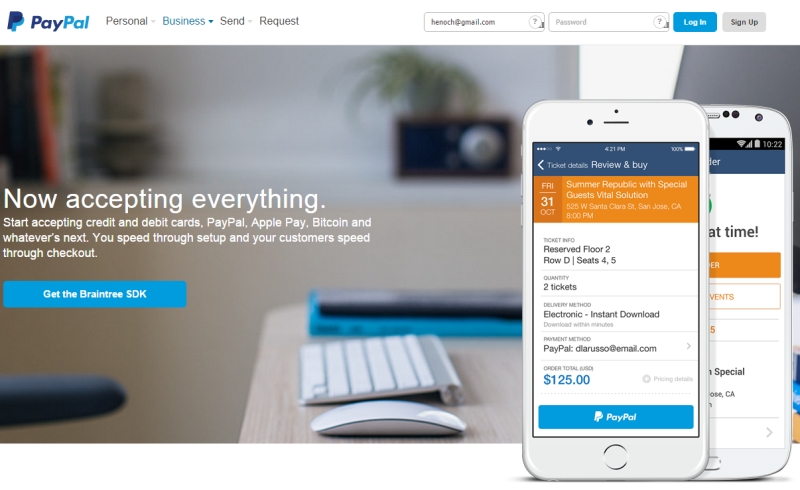 How Braintree works
Braintree partners with Coinbase and allows online sellers to accept bitcoin payments seamlessly. Customers can pay with bitcoin instantly on any device, without manually transferring bitcoin or scanning QR codes. The service claims to have zero transaction fees on the first 1 million dollar in bitcoin sales and a 1% fee for cashing out to a bank account.

As Cryptocoins News says, eBay CEO John Donahoe already said last year that bitcoin would play an “important role” in the company’s plans, before eBay and PayPal agreed to split. In the aforementioned SEC filling, eBay says about the split: “The commerce and payments landscape is rapidly changing, and each business faces different competitive opportunities and challenges.  […] As independent companies, we expect eBay and PayPal will be sharper and stronger, and more focused and competitive as leading, standalone companies in their respective markets. eBay and PayPal also will benefit from additional flexibility and agility to pursue new market and partnership opportunities.”

Bitcoin has become a serious payment method
Latest data from bitcoin payments processor BitPay seems to show that the crypto currency is switchting from an investment commodity to everyday currency. The total number of bitcoin transactions more than doubled last year, while at the same time the average order value has dropped by almost half. “As merchant and consumer adoption increases, this signifies that bitcoin is moving from a commodity to a payment method.”