The ecommerce industry in Europe consists of three major markets, upcoming countries and thriving startup scenes. Because the European industry consists of several regions that all play their own role, it can be difficult to see it as one. Let’s have a look at ecommerce in Europe.

Cards account for the largest share of business-to-consumer ecommerce transactions in Europe, as research from yStats.com shows. Digital wallets are second best. In the UK, credit cards are very popular: about four in ten online transactions are paid this way. Debit cards account for 35 percent of all online transactions, while PayPal is the country’s third most used online payment method. Germans like to pay with invoice, while French consumers use debit card Carte-Blue, MasterCard, American Express and PayPal. In the Benelux, iDeal (the Netherlands) and Bancontact (Belgium) are very popular. For more common payment methods in Europe, check out our overview of the most popular online payment methods in Europe.

The ecommerce market in Europe

Ecommerce sales in Europe were worth 718 billion euros in 2021. Most of the online turnover is still being generated in Western Europe, which accounts for approximately 70 percent of total European online retail turnover. Southern Europe, Northern Europe, Central Europe and Eastern Europe show a much lower share of European ecommerce with 15, 7, 6, and 1 percent respectively.

According to research by Direct Link, Germany and the UK are the strongest ecommerce markets in Europe. They have relatively high purchase amounts and a high ecommerce share combined with a large population. Data from Statista shows that ecommerce sales in the UK reached 28,9 percent of the total retail sale in 2021. In the Netherlands, online sales amounted to 23,9 percent of total retail trade. It is followed by Germany (21,9 percent) and France (14,6 percent). 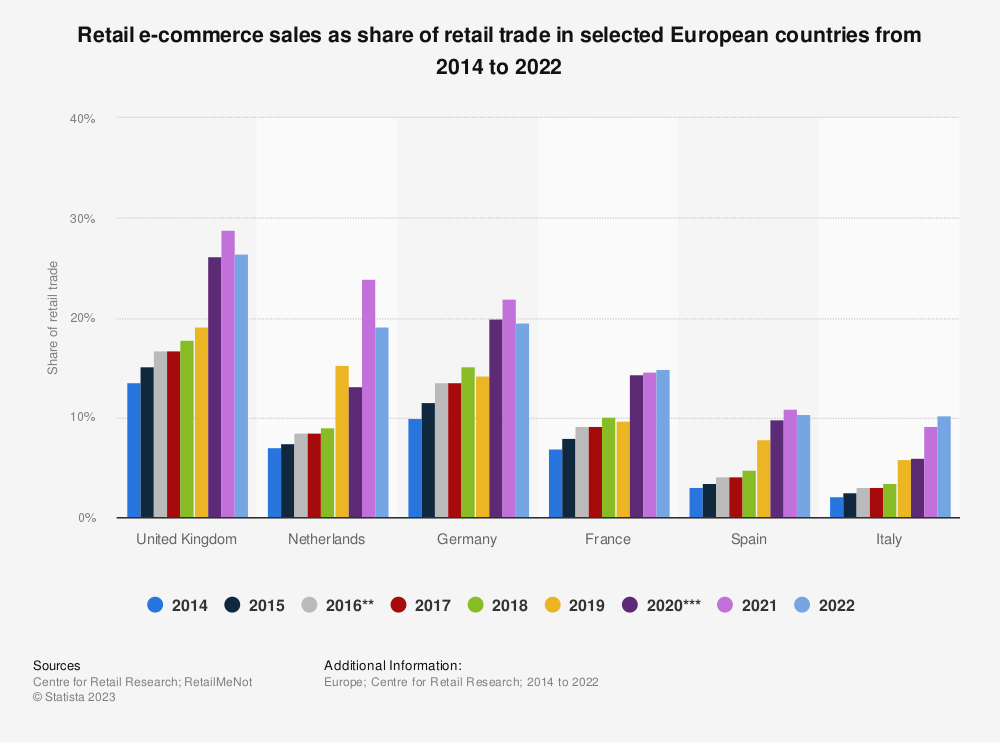 Of course, major American retailers have their influence on local ecommerce industries in Europe. As a matter of fact, Amazon was the most-visited online marketplace in Europe in 2018. But that’s not to say Europe doesn’t have its own ‘Amazons’. In Internet Retailer’s top 10 list of biggest online retailers in Europe, Amazon, Staples and Apple are the only American retailers. The list also contains Otto (Germany), Tesco (UK), Groupe Casino (France), Shop Direct Group, Home Retail Group (both UK), Zalando (Germany) and John Lewis (UK). And then there’s this list of top 10 online stores in Europe, which features Amazon (on 7th place) as the only non-European player in that list.

Read all our articles about ecommerce in Europe.