Ozon has raised 108 million euros in funding from holding company Sistema and telecommunications provider MTS. Both parties have invested 75 million dollars (€54mn) in exchange for a 10.8% stake each. Russia’s largest ecommerce company is now valuated at about 500 million euros.

Sistema and its telecoms subsidiary MTS join backers like Index Ventures, Rakuten and Cisco, who will all remain wholly invested in Ozon. French-born Maëlle Gavet, CEO of Ozon, told her Twitter followers she is “very excited to announce that we’ve just closed a 150M $ fundraising. Thanks to the OZON team for all your efforts over the last few months!”

And according to her, currently only 24% of internet users in Russia make purchases online. “This indicates there’s a huge potential for growth in the sector”. As a result of the acquired stake by MTS, customers from Ozon will be able to pick up their orders in MTS’s retail stores.

Ecommerce market in Russia
In the investor presentation from Sistema there’s a transaction overview with interesting facts about Ozon and the Russian ecommerce industry. It states that Ozon Group accounts for 15% of all online buyers in Russia and 20% of all Russian online users and that it welcomes 16 million unique monthly visitors to their websites Ozon.ru, Sapato, Ozon Travel, O-Courier and Ozon Solutions. They also show this interesting sheet about the ecommerce market in Russia: 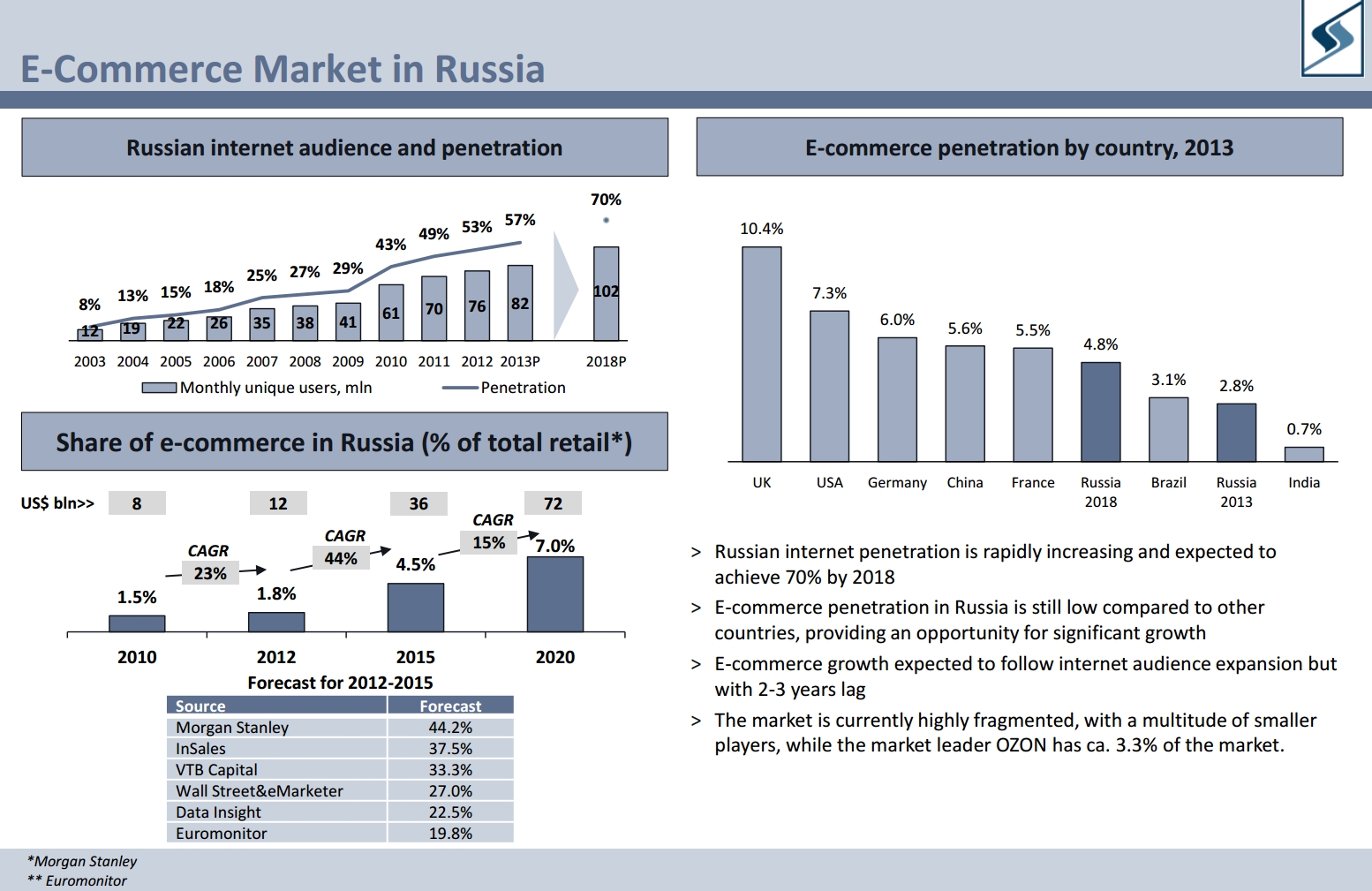 The Russian internet penetration will grow from 57% in 2013 to an estimated 70% by 2018. The number of monthly unique users will grow from 82 million last year to 102 million by 2018. The share of ecommerce in Russia will grow from 1.8% two years ago to 7% by 2020. “The market is currently highly fragmented, with a multitude of smaller players, while market leader Ozon has about 3.3% of the market.”

The five ecommerce companies from Ozon Group
Ozon owns five Russian ecommerce company. There’s of course Ozon.ru, the country’s largest online shop with more than 750,000 unique visitors per day and over 3.5 million orders delivered in 2013. There’s Sapato, one of the largest online sellers of clothes, footwear and accessories, which Ozon bought in February 2012. There’s Ozon Travel, a very popular internet resource for travelling with 1.5 million unique visitors per month, there’s O-Courier with 5 logistic terminals and about 3.9 millions parcels processed in 2013, and there’s Ozon Solutions, a B2B launched last year that helps Russian and international brands to develop strategies to improve their online sales.

Ozon also raised funding worth 72 million euros back in 2011, when the new equity funding was being used partly for recreating the Russian postal service.