23% of Dutch ecommerce happens via mobile

April 6, 2017 by Ecommerce News. About Mobile, Payments with tags The Netherlands. 9690 views.

The recent figures were shared by the eCommerce Payment Monitor, a research done by GfK in collaboration with payment method iDeal and Dutch ecommerce association Thuiswinkel.org.

When we just look at the number of online purchases in the Netherlands, the market increased by 22 percent compared to the situation in 2015. Last year, Dutch consumers completed 174 million online purchases. iDeal is still the most popular payment method and saw its market share increase from 56 to 57 percent. The biggest growth in percentage terms however is shown by AfterPay, which increased 49 percent to now have a market share of 3 percent. 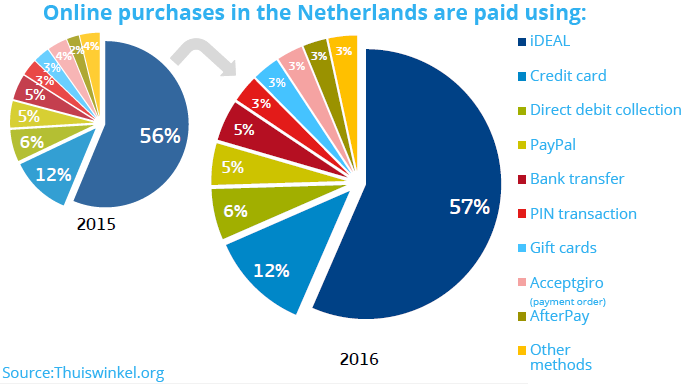 ‘The Netherlands still have a long way to go’

“It is striking that the increase in transactions with the smartphone is indeed large, but these transactions represent less than 10 percent of all online payments”, says Wijnand Jongen, director of Thuiswinkel.org. “We are still way behind, for example the United Kingdom, where already over 30 percent of all ecommerce transactions happens via smartphone. And in China, the percentage is even above 70 percent. Therefore, the Netherlands still have a long way to go, but in the coming years we will tighten the gap by using new technologies and multifunctional ecommerce apps.”