26% more iDeal transactions in the Netherlands

iDeal, by far the most popular payment method in the Netherlands, keeps on growing. It was being used 103.9 million times during the first six months of this year. This is an increase of over 26% compared to the same period last year.

When you have an online store running in the Netherlands, you just can’t be successful without offering iDeal as one of the payment methods. It’s being used by the majority of online shoppers and often foreign online retailers who enter the Dutch market will get criticized immediately if they don’t offer iDeal. 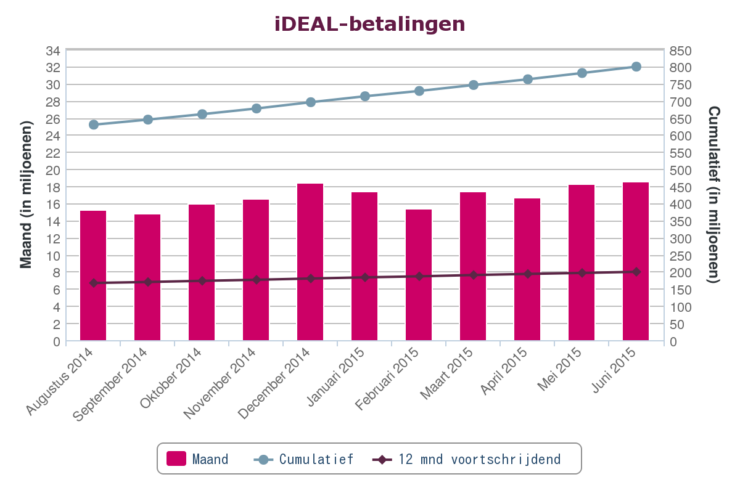 According to iDeal there are currently more than 100,000 online stores and other organizations who offer iDeal as a payment method. “On average, more than 13 million iDeal transactions take place every month”, the company states.

Bigger growth than in 2012 and 2013
Another graph from iDeal shows the number of transactions happening every year is still growing strong. Of course it has slowed down (back in 2007 the growth increased by 238% compared to the year before), but still: in 2014 the number of transactions grew by 26.5% compared to 2013. This year-on-year growth rate is bigger than it was in the two years before.

iDeal also shared some data on the availability of the payment method. “iDeal is pre-eminently a payment method that should be always, 24 hours a day, available. But IT systems however, need to be maintained. This also applies to internet banking.”

Currency, the company behind iDeal, has set standards with regards to the availability. During primetime (from 07:00 AM until 01:00 AM) iDeal needs to be available during 99% of the time, while from 01:00 AM until 07:00 it’s 93.5%. Dutch ecommerce association Thuiswinkel.org however wants a higher standard. Their goal is to have iDeal available 100% of the time.