March 11, 2015 by Ecommerce News. About Consumer behavior with tags The Netherlands. 7712 views.

Ecommerce is getting more and more popular in the Netherlands. Between 2005 and 2014 the share of people shopping online grew from 50% to 77%. Dutch consumers especially shop online to buy clothing and to book vacations and holiday trips. More than half of online shoppers in the Netherlands bought one of these products during the last twelve months.

This new information was revealed by the Dutch Central Bureau of Statistics (CBS). The fact more people in the Netherlands are shopping online has of course to do with the increasing adoption of the internet. The last couple of years, the Dutch are always among the top 5 countries in Europe when it comes to fast broadband internet.

96% has access to the internet
According to CBS, fast internet is an important reason for the increased internet activities. Whereas there was 78% of the Dutch households who had access to the internet back in 2005, last year this percentage was already 96 percent. But: “the share of people having access to internet isn’t showing any growth the last four years, so it looks like it has reached its saturation point.”

“Households own several devices to go online. The laptop and smartphone are replacing the desktop pc. In 2005, people got online using their personal computers, but last year they did this primarily using their laptop or smartphone”, says the governmental institution. 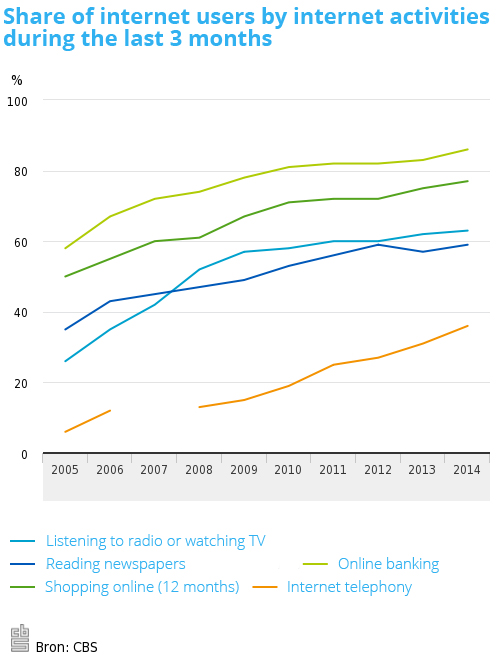