February 21, 2019 by Ecommerce News. About Statistics with tags The Netherlands. 7013 views.

Dutch omnichannel retailer has generated revenues worth 1.35 billion euros last year. That’s an increase of 160 million compared to the situation in 2017. According to Coolblue, this growth is partly due to the introduction of an English and French website and app.

Last year, Coolblue achieved a turnover of 1 billion euros in the Netherlands, while the remaining 347 million euros was generated in Belgium, the Coolblue Yearbook shows. The total amount of 1.35 billion euros worth of products it sold in the Benelux last year is still less than the 1.5 billion euros CEO Pieter Zwart said it expected to generate in 2018.

But still, Coolblue hasn’t been inactive last year. Aside from introducing an English and French version of its website and app, the company also presented the Android version of its mobile shopping app. After the launch in August last year, the company also introduced an augmented reality feature in the app. This enabled consumers for example to check how a certain tv would look like in their living room.

2018 was also the year in which the Dutch retail company started delivering orders using their CoolblueBikes. Couriers used these vehicles to deliver small packages in seven big cities in the Netherlands and Belgium. In December last year, about 60 percent of all small parcels that got delivered to customers in big cities, were brought to them by using a CoolblueBike.

Coolblue also started offering customers to possibility to choose a preferred, paid time slot for white goods delivery. And it started delivering televisions, instead of depending on a third party for this.

Coolblue did not only see its revenue increase, the net profit also grew: from 9.1 million euros in 2017 to 12.1 million euros last year. “While our profitability is still relatively low, we are pleased with the developments shown in the second half of 2018. These foreshadow an increasing profitability in 2019.”

This year, Coolblue will open another five physical stores. It already announced opening a megastore in Tilburg, but it hasn’t shared where the other locations will be. 2019 will also be the year in which Coolblue invests in installation services for both kitchen appliances and TVs. It will also invest in even more visibility and delivery services. 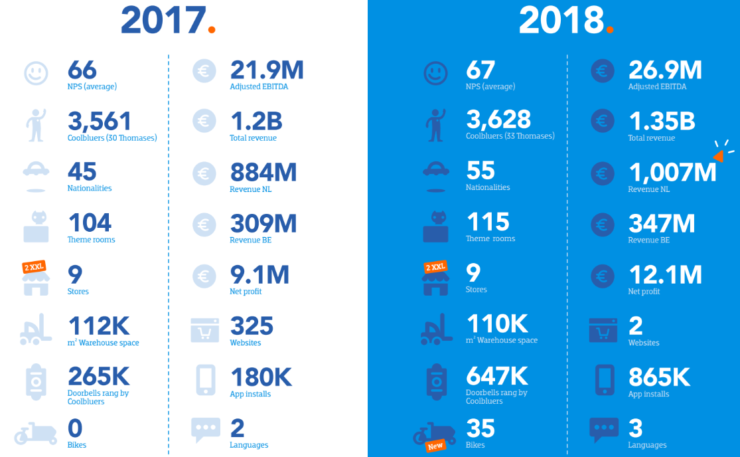