DHL tests cargo bicycles in Germany and the Netherlands

March 3, 2017 by Ecommerce News. About Logistics with tags Germany, The Netherlands. 19447 views.

DHL Express has launched a pilot project in Germany and the Netherlands, in which it uses cargo bicycles for inner-city deliveries. The two pilots of the City Hub concept launched in Frankfurt, Germany’s fifth largest city, and Utrecht, a major Dutch city that wants to become climate-neutral by 2030.

It’s not the first time DHL is using the so called Cubicycles. The logistics company has already replaced about 60 percent of inner-city vehicle routes in more than 80 European cities in 13 European countries with cargo bicycles. Fourteen Cubicycles, cargo bicycles which can carry a container with a load of up to 125 kilograms, are driving around in seven cities across the continent.

According to DHL, the solution will significantly reduce emissions because it minimizes the mileage and time spent on the road by standard delivery vehicles. “Each City Hub can replace up to two standard delivery vehicles, with an equivalent CO2 saving of over sixteen tons per year and a significant reduction in other emissions”, the express services provider states. The company expects that the new City Hub and Cubicycle will help them to speed things up in other markets over the next three to five years. 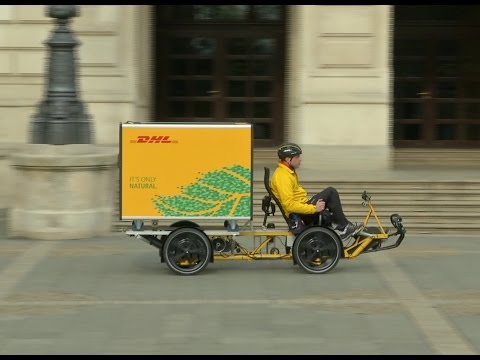 Advantages of using bicycles for delivery

It’s not surprising DHL is betting more and more on the usage of bicycles, as they have several advantages over other delivery options. For example, they can bypass traffic congestion, make more stops and the total cost of ownership over their lifetime is less than half of a van.

The Cubicycle was introduced by DHL Express in 2015. The bike is built by the Dutch company Flevobike.