‘Ecommerce in Germany is worth over 100 billion euros’

January 20, 2017 by Ecommerce News. About Statistics with tags Germany.

For the first time, German consumers spent more than 100 billion euros online in one year. That’s the calculation of a German consulting company, which wants to portray the entire B2C online market in Germany. According to them, the online sales of physical products was worth around 52.5 billion euros last year.

Consulting company Schickler looked at the ecommerce in Germany a little different than we are used to. They only analyzed private consumption, so no purchases by companies. And the total sales volume was recorded, irrespective of whether it was a one-time payment or a subscription. Schickler divided purchases into offline and online and then split the delivery of goods and services into these categories. So for example, e-learning is something that’s purchased and delivered online, while travel or photos are things that are booked or ordered online, but will then be physically experienced or delivered.

Sales of physical products and services

Sales of digital products and services

The industry of digital products and services is much smaller. Digital products, such as software, audio and e-books, generated 6.1 billion euros worth of sales last year and will grow 20 percent this year. Digital services will grow much slower this year, Schickler predicts. This industry, consisting of services such as gambling, dating websites and e-learning, was worth around 2.1 billion euros last year, a 5 percent increase compared to 2015.

In total, the turnover of ecommerce in Germany was, according to Schickler, worth 105.6 billion euros, which is an increase of 10 percent compared to the results in 2015. For this year, an increase of 9 percent is predicted. For comparison the total retail industry in Germany was worth about 486 billion euros last year, according to data from the Federal Statistical Office and the German Retail Federation.

Last week, the German association of furniture industries, BVDM, announced that 7 percent of sales in their industry happened online and was worth 2.3 billion euros last year. 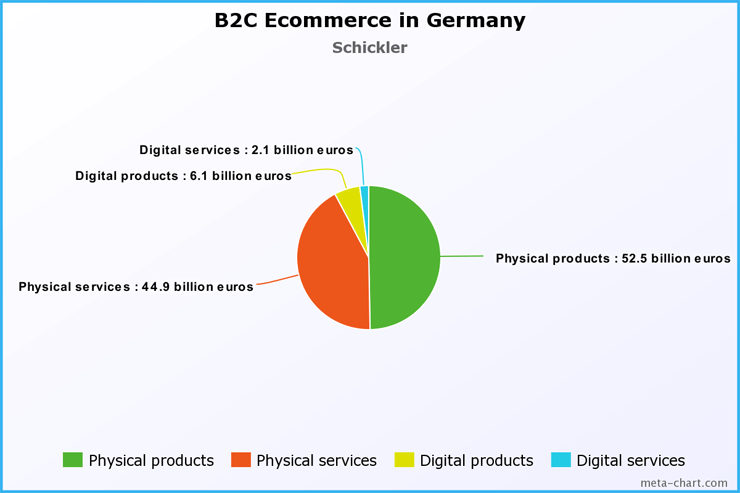