The business-to-consumers ecommerce turnover of Belgium is still increasing, with a 12 percent year-on-year growth rate this year. This would mean ecommerce in Belgium will be worth 11.84 billion euros at the end of this year.

These numbers come from Ecommerce Foundation’s report about the online retail industry in Belgium. While the ecommerce turnover is still increasing in Belgium, the average spending per buyer is predicted to decrease slightly. Last year, 53 percent of Belgian population can be described as an online shopper. Their average spending grew to 1,700 euros during that year, but it’s predicted it will decrease to 1,686 euros this year. 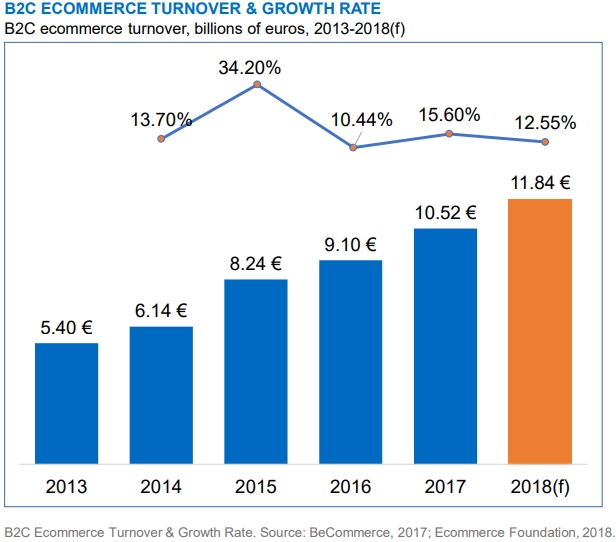 The majority of online spending in Belgium goes through laptops (54 percent), followed by PCs (30 percent), tablets (9 percent) and smartphones (6 percent). And when Belgian consumers shop online, they mostly order clothing and footwear. With 42 percent, this was the most popular product category in 2017. It’s followed by home electronics (31 percent), books (21 percent) and cosmetic and skincare (18 percent).

Last year, 63 percent of cross-border shopping happened at the online shops of sellers from other EU nations, while 6 percent was with sellers with an unknown country of origin. Purchasing from unknown countries is becoming more popular, as this share was just 4 percent in 2016.

Belgians love to shop at Dutch websites
The Netherlands is an extremely popular country to order products from: 34 percent of the Belgian population has shopped online from the Netherlands, significantly more than the percentage of people who shopped online in China (14 percent) or the UK or Germany (both 13 percent). In 2014, Ecommerce News wrote an article about the influence of the Netherlands in Belgian ecommerce.