Ecommerce in France grew 14 percent last year. The online business-to-consumer turnover was worth just under 82 billion euros and is expected to rise even further in the coming year. The French ecommerce turnover is forecast to be worth 93 billion euros at the end of this year.

This can be concluded from the latest France Ecommerce Report by the Ecommerce Foundation. This study also shows that the B2C ecommerce turnover of France keeps on growing every year with about 14 percent. Last year, the online retail industry increased by 14.27 percent and for next year a 14.08 percent growth rate is expected. 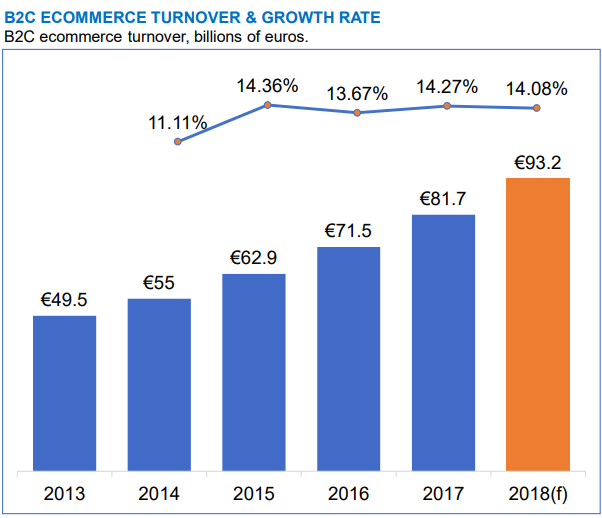 The internet penetration, the share of the population with access to the internet, is increasing with a positive growth rate. After increasing by 1.54 percent in 2016, last year was less convincing with 0.4 percent. But for this year, a year-on-year growth rate of 1.51 percent is expected.

Data form Fevad shows that French consumers still prefer to have their online purchases delivered at home or at work, but delivery with payment in-store and delivery to a secure locker are getting increasingly popular this year.

When French consumers shop across the border, they shop mainly from foreign websites (42 percent), compared to foreign sellers on French marketplaces (29 percent). And another 29 percent of consumers say they purchase via both channels.

While purchasing from national sellers has decreased, the number of online shoppers that bought from sellers in non-EU countries has increased: from 15 percent in 2016 to 17 percent last year. The majority of cross-border deliveries came from China (74 percent), followed by the United States (41 percent).