This stems from research conducted by German ecommerce association ECO. It predicts that by 2019, the turnover of the online economy in Germany will have increased by nearly 60 percent to 114 billion euros, which corresponds to an average annual growth by twelve percent. Recently, the Institut für Handelsforshung in Cologne published an ecommerce report, saying the German B2C ecommerce market has grown by about 11 percent from 2013 to 2014. This matches the growth rates issued by ECO.

“Also in the coming years, the German online industry is on the rise”, says Harald Summa, managing director of the ecommerce association. “If it continues like this, the internet is about to surpass our own German industries, such as chemicals and mechanical engineering.” The expected ongoing boom in the industry also has a positive effect on the labor market, ECO writes. It expects the number of employees working in the German internet economy to rise from 243,000 this year to 332,000 in 2019. This corresponds to an annual increase of over 8 percent.

With regards to B2B ecommerce, ECO expects its revenue to increase from 33.1 billion euros this year to 57.9 billion euros by 2019. Also in terms of B2C ecommerce a strong growth is expected: from 7.2 billion euros now to 11.3 billion euros in four year, which would mean an increase of 12 percent per year. 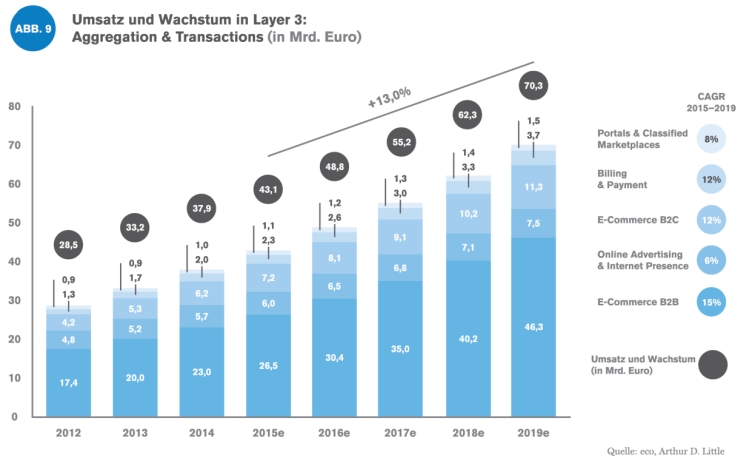