Ecommerce in the Nordics was worth 21.9 billion euros in 2016

The ecommerce industry in the Nordic region was worth 21.9 billion euros in 2016. The biggest share of online retail revenue in this region comes from Sweden, which generated 8.5 billion euros last year. But Norwegians scored the highest monthly amount spent per person.

PostNord published the ninth edition of its annual report, ‘E-commerce in the Nordic region’ [pdf], and it’s filled with information about ecommerce in Sweden, Denmark, Norway and Finland. The data differs significantly from data in the previous years, because PostNord began monitoring developments monthly since January 2016. Before, consumer habits were monitored quarterly. But that also means recent data is much more accurate and gives a better view of the ecommerce industry in the Nordics.

‘Sell through multiple channels in the Nordics’

One of the key findings of the report is that ecommerce companies operating in the Nordic region, need to be able to offer sales through multiple channels. “Employing a clear omnichannel strategy appears to be increasingly important if companies are going to keep pace with their competitors”, the logistics company writes.

During an average month in 2016, 4.7 million Swedish consumers shopped online (67 percent of the total population), while 2.6 million Danish (64%), 2.4 million Norwegian (65%) and 1.9 million Finnish consumers (49%) did the same during that period. Swedes spent on average 151 euros per person per months, which is lower than Danish (162 euros) or Norwegian consumers (173 euros) did. But it’s significantly more than the average estimated value per person per month in Finland (135 euros). 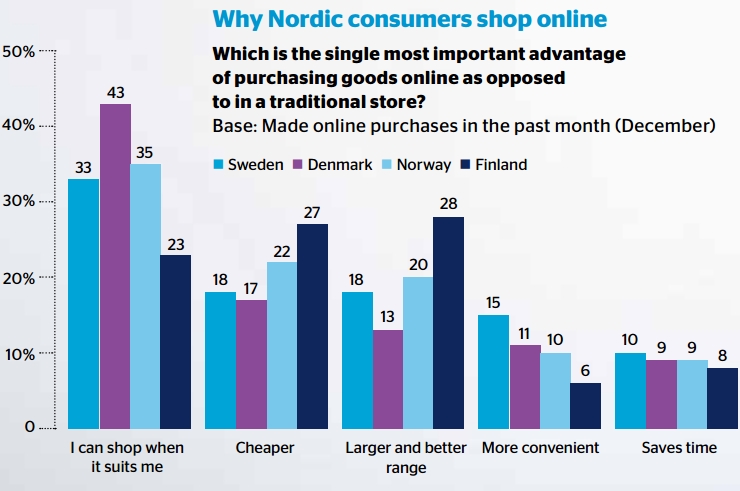 Most popular products in the Nordics

In the Nordics, clothing and footwear are the most popular products purchased online. These are followed by media and home electronics. The purchasing pattern is quite similar in this region, but there are also some differences apparent. For example, it’s more common to buy groceries online in Denmark, while online consumers in Sweden buy health and beauty products more often than their Nordic neighbors.

Over one-third of online consumers in the Nordics make purchases from international ecommerce websites very month. Finland and Norway are more dependent on foreign players than Sweden and Denmark. Last year, purchases from foreign retailers accounted for 25 percent, or 5.4 billion euros, of total ecommerce consumption in the Nordics. The United Kingdom and China are the most popular countries to purchase from, followed by Germany, the US and Sweden.

Mcommerce in the Nordic region

PostNord’s study shows that one in four Nordic consumers who shopped online has made a purchase via their mobile phone. In all four countries, consumers aged 18-49 years do this much more often than older consumers, but in Sweden, consumers shop using their mobile phone almost twice as much as their Finnish counterparts.

In Finland and Norway, consumers prefer to have their goods delivered in the mailbox at home, while picking up items at collection points is most popular in Sweden and Denmark. And in Finland, many consumers like to use parcel boxes that are available throughout the day.