April 10, 2020 by Ecommerce News. About Statistics with tags The United Kingdom.

Ecommerce in the United Kingdom is expected to be worth 222.5 billion euros at the end of this year. That would mean an increase of almost 11 percent compared to the situation last year, when the b2c ecommerce turnover was worth just over 200 billion euros.

Last year, ecommerce in the United Kingdom finally surpassed the milestone of 200 billion euros. Now, it’s set to add an extra 22 billion euros on top of that, with the expectation that the British online retail industry will be worth 222.5 billion euros at the end of the year.

The predicted growth of 10.96 percent is the smallest growth rate since 2016, when the industry increased with only 4.47 percent, a study from RetailX shows.

The UK, the largest B2C ecommerce market in Europe, is a very digitized society, with 96 percent of the population expected to be online this year. Last year, 87 percent of that online population bought something online.

Most popular parcel delivery providers in the United Kingdom

Clothing is most return product category

The most returned product category among British consumers is clothing (30 percent), followed by shoes (13 percent) and consumer electronics (7 percent).

Royal mail is the UK’s most popular parcel delivery provider.

In the study, it’s also shown what the most popular goods are that are purchased online in the UK. Clothes or sports goods are number one (60 percent), followed by household items (49 percent), holiday accommodation (44 percent) and travel arrangements (43 percent). 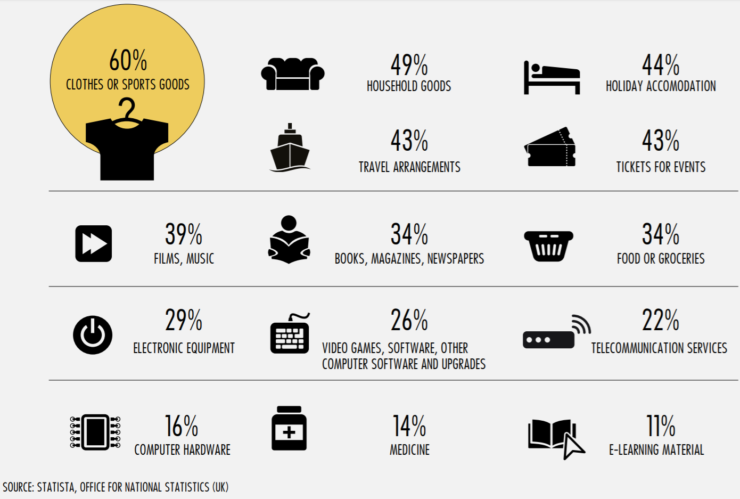