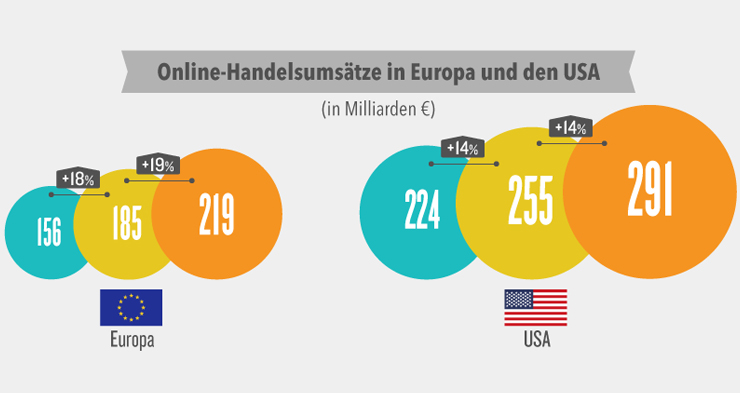 These predictions come from RetailMeNot, which analyzed the European ecommerce industry together with the Centre for Retail Research. The research also suggests that while online retail sales in Europe will increase by 18.4%, offline retail sales will decrease by 1.4%.

Europe grows faster than the US
RetailMeNot did not only look at European countries, it also looked at how the ecommerce industry in Europe will grow compared to that of the US. Although the online retail industry is much larger (€224bn vs. €156bn in 2014), the European ecommerce industry will probably grow with 18% and 19% this year and next year, while these growth rates are both 14% for the US.

When we look at some individual  European countries, we’ll see that the United Kingdom, Germany and France are – of course – still the biggest ecommerce countries on this continent. Online sales in the UK are expected to grow by 16.2% this year, which is more than last year and probably will be more than the growth rate in 2016. The British ecommerce industry is expected to reach 61.84 billion euros this year. In Germany, the industry will be probably worth 52.79 billion euros and in France, ecommerce sales will reach 36.53 billion euros.

The hardest growth rate (year-on-year) can be found in Germany, where online sales is expected to increase by 23.1%. That’s quite surprising for such a big and mature ecommerce market. Also Poland (21%) and Italy (19%) show some lovely numbers. These are also countries where the growth rate will be even higher (respectively 22.5% and 19.7%).

The English version (in £) can be found here.